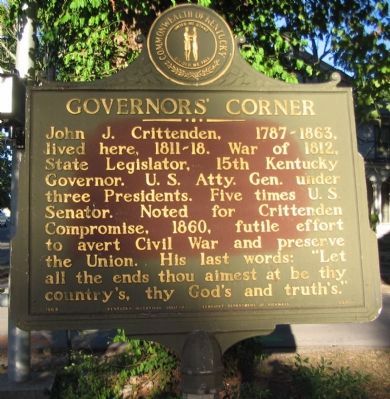 Topics and series. This historical marker is listed in these topic lists: Government & Politics • War, US Civil. In addition, it is included in the Kentucky Historical Society series list. A significant historical year for this entry is 1812.

Other nearby markers. At least 8 other markers are within walking distance of this marker. O'Bannon House (a few steps from this marker); Townhouse of Maj. Richard Bibb 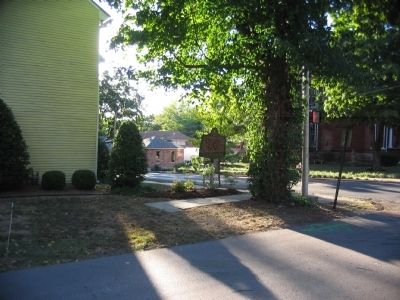 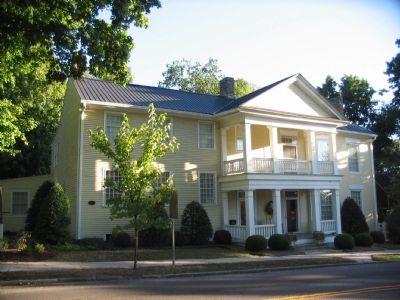 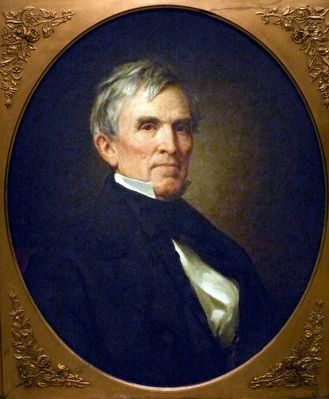 “During the campaign of 1860, many southerners declared that Abraham Lincoln's election to the presidency would give them no choice but to secede from the Union. One notable exception was Kentucky senator John Crittenden. This passionate advocate of national unity undertook the task of reaching an accommodation designed to derail the secession movement of 1861. Central to his plan was a proposal that would have permanently guaranteed the rights of slaveholders below the nation's 36°30' parallel. By now, however, bitterness over the slavery question ran too deeply, and neither North nor South could accept this conciliating measure. Instead, Crittenden had to content himself with ensuring that his own Kentucky did not secede; it was largely through his exertions that this state remained loyal to the Union after most of the South had left. ” — National Portrait Gallery
Credits. This page was last revised on August 21, 2018. It was originally submitted on September 23, 2010, by Craig Swain of Leesburg, Virginia. This page has been viewed 1,028 times since then and 95 times this year. Photos:   1, 2, 3. submitted on September 23, 2010, by Craig Swain of Leesburg, Virginia.   4. submitted on September 6, 2015, by Allen C. Browne of Silver Spring, Maryland.
Share this page.