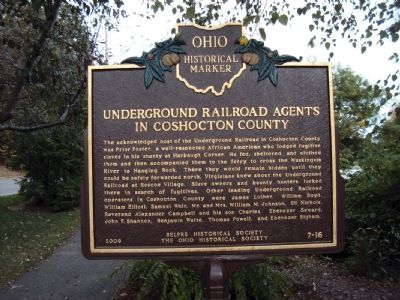 Side A:
The acknowledged host of the Underground Railroad in Coshocton County was Prior Foster, a well respected African American who lodged fugitive slaves in his shanty at Harbaugh Corner. He fed, sheltered, and clothed them and then accompanied them to the ferry to cross the Muskingum River to Hanging Rock. There they would remain hidden until they could be safely forwarded north. Virginians knew about the Underground Railroad at Roscoe Village. Slave owners and bounty hunters lurked there in search of fugitives. Other leading Underground Railroad operators in Coshocton County were James Luther, William Boyd, William Elliott, Samuel Weir, Mr. and Mrs. William M. Johnson, Eli Nichols, Reverend Alexander Campbell and his son Charles, Ebenezer Seward, John F. Shannon, Benjamin Waite, Thomas Powell, and Ebenezer Bigham.

Side B:
The Muskingum River forms at the confluence of the Tuscarawas and Walhonding rivers at Roscoe Village and flows south approximately 100 miles to the Ohio River at Marietta. During the first half of the nineteenth century, fugitive slaves from Virginia crossed the Ohio River and followed 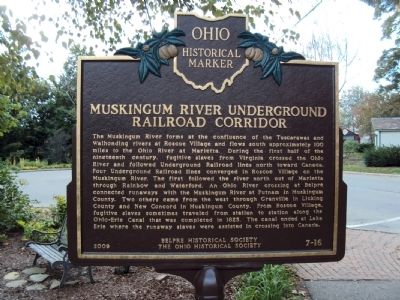 Click or scan to see
this page online
Underground Railroad lines north toward Canada. Four Underground Railroad lines converged in Roscoe Village on the Muskingum River. The first followed the river north out of Marietta through Rainbow and Waterford. An Ohio River crossing at Belpre connected runaways with the Muskingum River at Putnam in Muskingum County. Two others came from the west through Granville in Licking County and New Concord in Muskingum County. From Roscoe Village, fugitive slaves sometimes traveled from station to station along the Ohio-Erie Canal that was completed in 1825. The canal ended at Lake Erie where the runaway slaves were assisted in crossing into Canada.

Topics and series. This historical marker is listed in these topic lists: Abolition & Underground RR • African Americans • Waterways & Vessels. In addition, it is included in the Ohio Historical Society / The Ohio History Connection series list. A significant historical year for this entry is 1825. 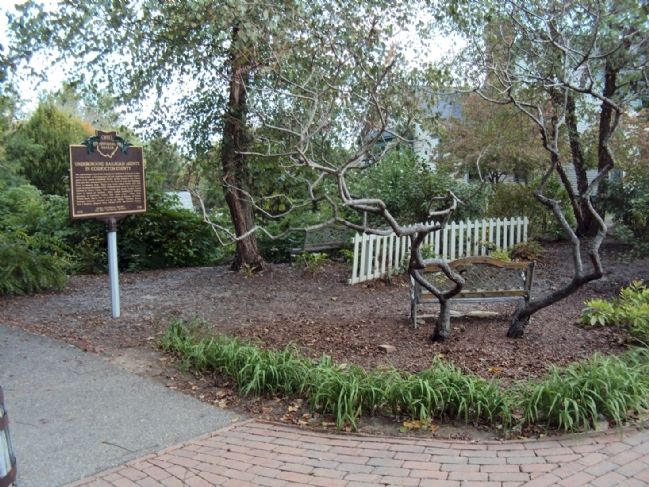 Photographed By Jamie Abel, September 25, 2010
3. Underground Railroad Agents in Coshocton County
front and to the left of the Roscoe Village Foundation building. Touch for map. Marker is at or near this postal address: 600 North Whitewoman Street, Coshocton OH 43812, United States of America. Touch for directions.

Related marker. Click here for another marker that is related to this marker. Underground Railroad agent Prior Foster, along with his brothers, Joseph and Levi, founded Woodstock Manual Labor Institute in 1846 in Woodstock Township, Lenawee County, Michigan. 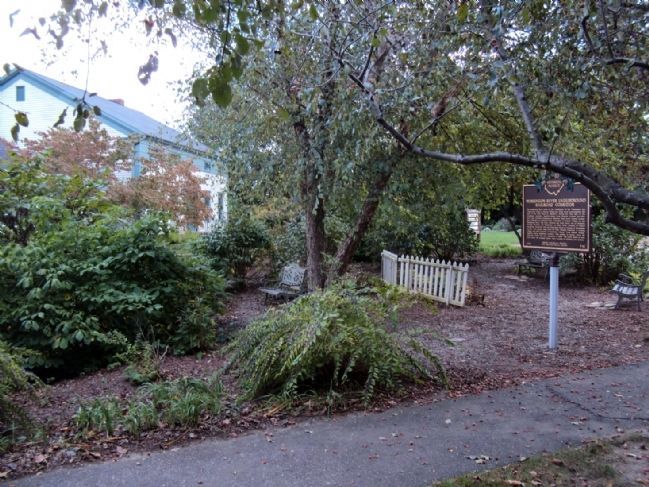