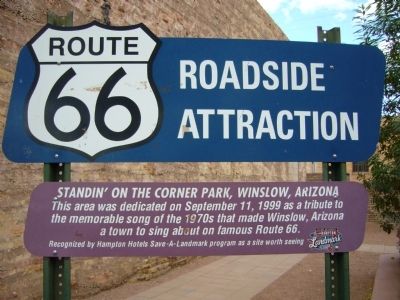 Photographed By Bill Kirchner, September 20, 2010
1. Standin' on the Corner Park Marker
Inscription.
Standin' on the Corner Park, Winslow, Arizona. Route 66 Roadside Attraction. This area was dedicated on September 11, 1999 as a tribute to the memorable song of the 1970's that made Winslow, Arizona a town to sing about on famous Route 66. . This historical marker was erected in 2003 by Hampton Hotels Save-A-Landmark Program. It is in Winslow in Navajo County Arizona

This area was dedicated on September 11, 1999 as a tribute to the memorable song of the 1970's that made Winslow, Arizona a town to sing about on famous Route 66.

Topics and series. This historical marker is listed in these topic lists: Arts, Letters, Music • Entertainment • Parks & Recreational Areas • Roads & Vehicles. In addition, it is included in the Route 66 Roadside Attractions, and the U.S. Route 66 series lists. A significant historical date for this entry is September 11, 1999.

Other nearby markers. At least 8 other markers are within 3 miles of this marker, measured as the crow flies. La Posada Hotel, Winslow, Arizona (about 800 feet away, measured in a direct line); a different marker also named La Posada Hotel (approx. ¼ mile away); The Winslow Bridge 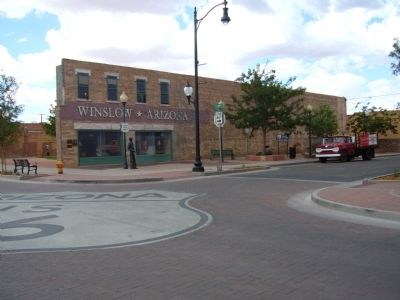 Photographed By Bill Kirchner, September 20, 2010
2. Standin' on the Corner Park

Additional commentary.
1. Standin' on the Corner Park.
"Take It Easy", was a song written by Glenn Frey and his neighbor and fellow country-folk rocker Jackson Browne. Browne had written the majority of the song, up until the line "I'm standing on a corner in Winslow, Arizona, such a fine sight to see", where he was then stalled. Frey added the next line,("Its a girl my lord, in a flatbed Ford,slowin' down to take a look at me.") and Browne continued to finish the rest of the song. The song reached #12 on the Billboard Hot 100 and propelled the Eagles to stardom.[excerpt from Wikipedia] (Picture 2 shows an Eagle on the window sill, in tribute and a girl in a flatbed Ford, reflection in left window)
— Submitted October 1, 2010, by Mike Stroud of Bluffton, South 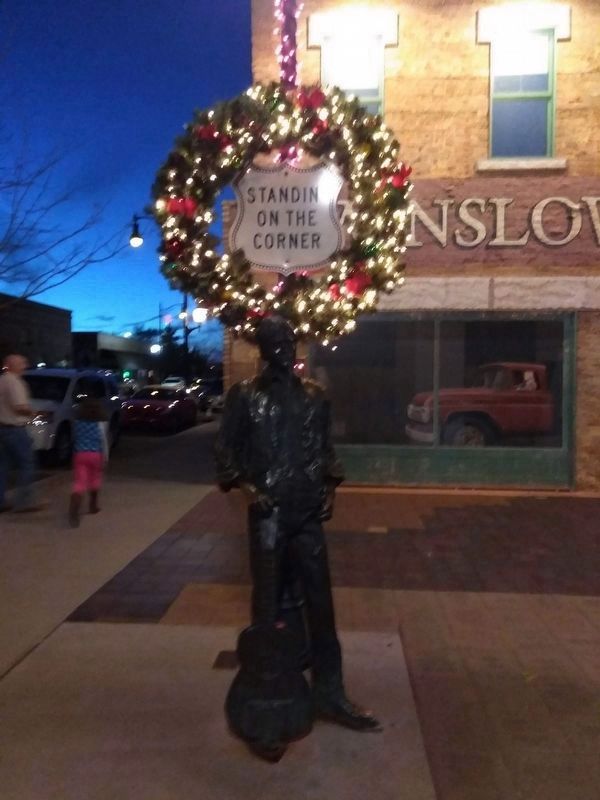 Photographed By Mike Stroud, 2002
4. Standin' on the Corner and "Eagles" Tribute 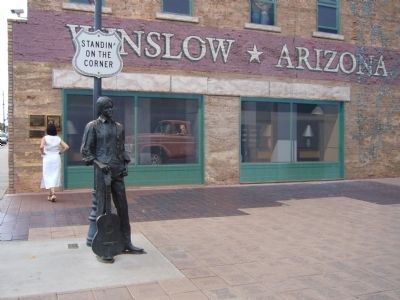 Photographed By Bill Kirchner
5. Standin' on the Corner Park 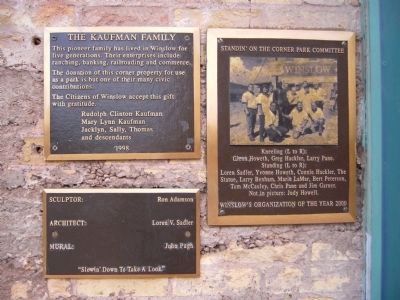 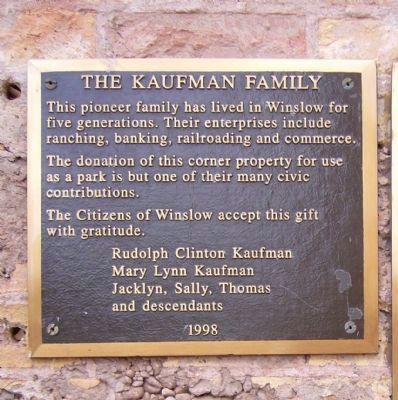 Photographed By Bill Kirchner, September 20, 2010
7. The Kaufman Family
This pioneer family has lived in Winslow for five generations. Their enterprises include ranching, banking, railroading and commerce.

The donation of this corner property for use as a park is but one of their many civic contributions.

The citizens of Winslow accept this gift with gratitude. 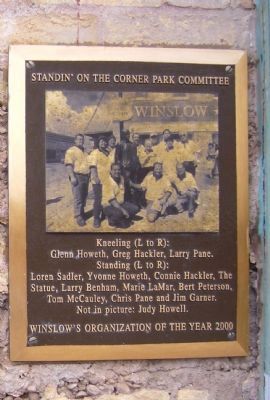 Winslow's Organization of the Year 2000 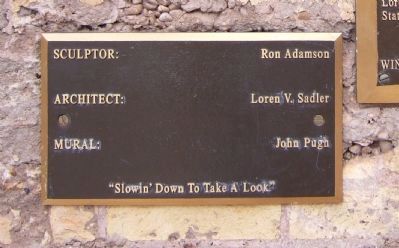 
"Slowin' Down to Take a Look" 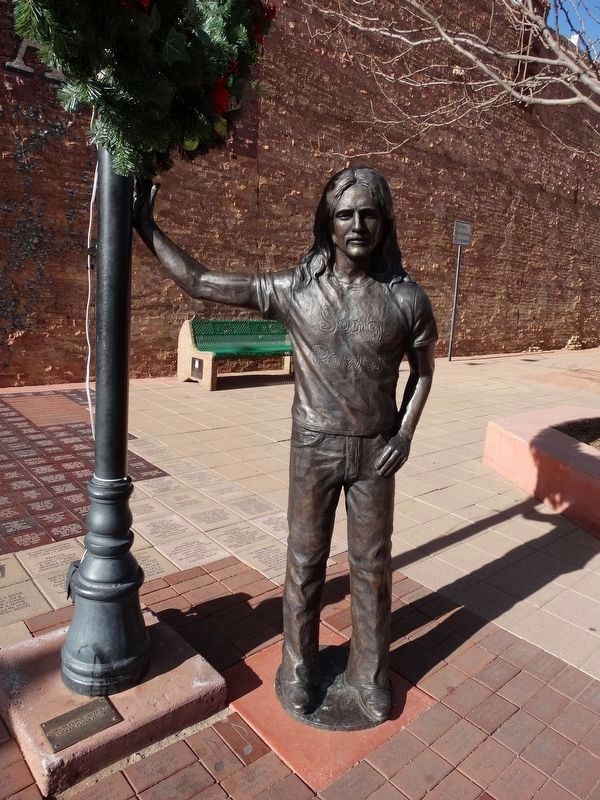 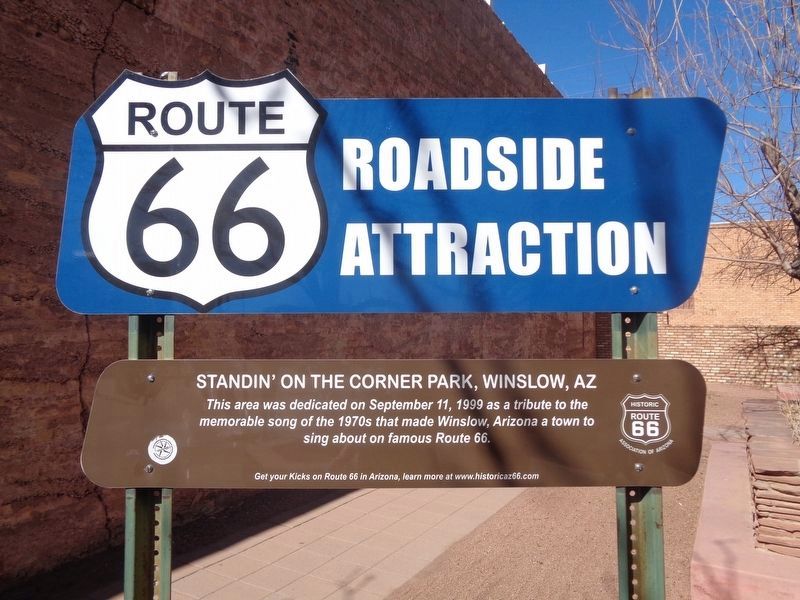