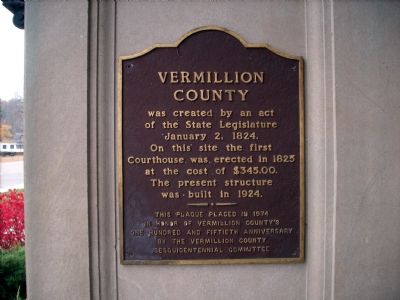 Vermillion County was created by an act of the State Legislature January 2, 1824. On this site the first Courthouse was erected in 1825 at the cost of $345.00. The present structure was built in 1924.

This plaque placed in 1974 in Honor of Vermillion County's one hundred and fiftieth Anniversary.

Location. 39° 53.09′ N, 87° 24.537′ W. Marker is in Newport, Indiana, in Vermillion County. Marker can be reached from the intersection of South Main Street and Market Street (State Road 450). Touch for map. Marker is in this post office area: Newport IN 47966, United States of America. Touch for directions. 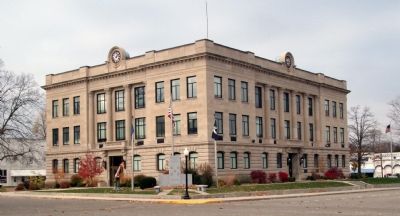 More about this marker. Marker is located on the East Entrance of the Courthouse.

Regarding Vermillion County Courthouse. The Courthouse is grand and historical. Each year, on the first weekend of October, the Courthouse is the center of a world class auto event known as the "Newport Hillclimb".

All type and years of quality automotive machines are on display showcasing the "Newport Hillclimb". It is a class run against the clock. Vehicles of all type race in their designated classes.

The time of each run is multiplied by the cubic-inch displacement of the engine to determine the final score. So, the fastest time doesn’t always guarantee a top trophy. 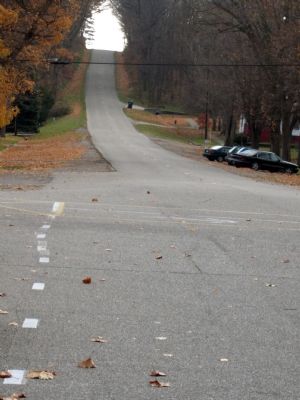 By Al Wolf, November 18, 2007
3. The "Hill"
From outside the east entrance of the Courthouse looking south up the hill. In the 1920's the hill was reduced to its current height and grade (1,800 feet long, 140 feet high).
Even reduced, even in good weather, cars often had to be driven backward in order to crest the hill. Reverse gear was the only gear low enough on the cars of that day to power them up the hill.
Races, hosted by The Newport Lions Club, have been held on this hill for many years.
1. Newport Hill Climb Web Site - Has Old Race Photos. (Submitted on November 19, 2007, by Al Wolf of Veedersburg, Indiana.)
2. Antique Motorcycle Hill Climb. A "YouTube" video, of the same hill in Newport, Indiana, shoing an Antique Motorcycle race. All race the clock. (Submitted on February 12, 2009, by Al Wolf of Veedersburg, Indiana.)