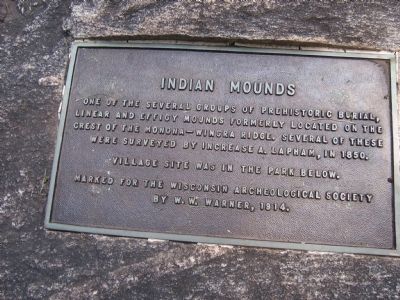 Photographed By Gordon Govier, June 23, 2009
1. Indian Mounds Marker
Inscription.
Indian Mounds. . One of the several groups of prehistoric burial, linear and effigy mounds formerly located on the crest of the Monona-Wingra ridge. Several of these were surveyed by Increase A. Lapham, in 1850., Village site was in the park below. , Marked for the Wisconsin Archaeological Society by W.W. Warner, 1914. . This historical marker was erected in 1914 by Wisconsin Archaeological Society. It is in Madison in Dane County Wisconsin

One of the several groups of prehistoric burial, linear and effigy mounds formerly located on the crest of the Monona-Wingra ridge. Several of these were surveyed by Increase A. Lapham, in 1850.

Village site was in the park below.

Marked for the Wisconsin Archaeological Society by W.W. Warner, 1914.

Topics. This historical marker is listed in these topic lists: Cemeteries & Burial Sites • Native Americans. A significant historical year for this entry is 1850.

Location. 43° 3.582′ N, 89° 24.51′ W. Marker is in Madison, Wisconsin, in Dane County. Marker is at the intersection of Erin Street and Wingra Street, on the left when traveling west on Erin Street. Touch for map. Marker is in this post office area: Madison WI 53715, United States of America. Touch for directions. 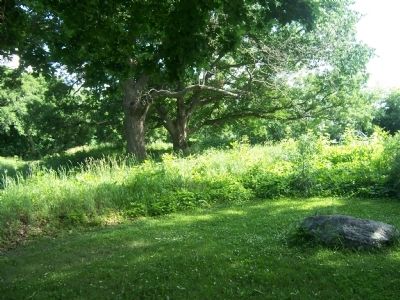 Regarding Indian Mounds. According to a 1996 survey by Robert A. Birmingham and Katherine H. Rankin entitled Native American Mounds in Madison and Dane County, "Overlooking the zoo at the corner of Erin and Wingra Streets is a Late Woodland mound group consisting of a bird effigy, a linear and six conicals. Two or three additional conicals and another bird have been destroyed. The plaque marking this group was dedicated in 1915 in a ceremony attended by representatives of twelve Native American tribes. Other mounds were once located below, on the grounds of the zoo proper. Most of Vilas Park was originally a marsh, providing a bounty of fish, birds, small game and wild rice to the mound builders."

According to the Madison Landmarks Commission, which designated the mounds, dating from 700-1200 A.D., as a landmark (no. 95) in 1990, "Wisconsin has the highest concentration of effigy mounds in the United States and the Madison area has one of the highest concentration of effigy mounds remaining. Most mounds were lost to 19th century agricultural practices 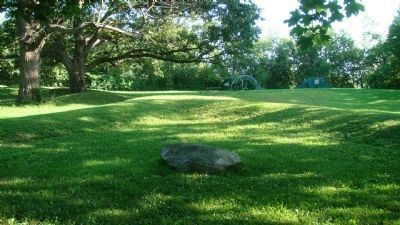 Photographed By William J. Toman, July 15, 2010
3. Indian Mounds Marker
With mounds in the background.
and city development. The mound builders were farmers who also engaged in hunting and gathering. They lived in small villages and migrated from one to another based on the seasonal availability of natural resources. The mounds often, but not always, have burials associated with them, but their exact purpose is not entirely understood. Mounds tend to have been built in places with beautiful views of the surrounding countryside. The mounds are considered sacred by modern Native Americans and should be treated with respect." 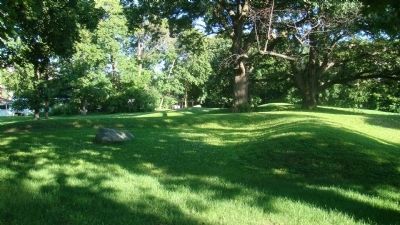 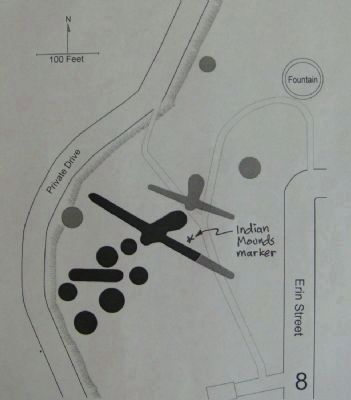