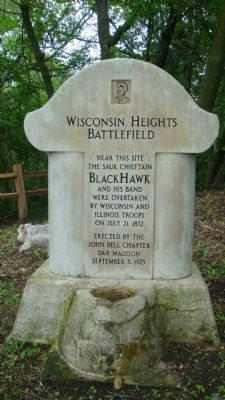 Near this site the Sauk chieftain Black Hawk and his band were overtaken by Wisconsin and Illinois troops on July 21, 1832

Topics and series. This historical marker is listed in these topic lists: Native Americans • Wars, US Indian. In addition, it is included in the Black Hawk War, and the Daughters of the American Revolution series lists.

Location. 43° 14.702′ N, 89° 43.401′ W. Marker is near Mazomanie, Wisconsin, in Dane County. Marker is on State Highway 78 0.4 miles south of County Road Y, on the left when traveling south. The marker can be accessed by a path beginning at the Battle of Wisconsin Heights marker. Touch for map. Marker is in this post office area: Mazomanie WI 53560, United States of America. Touch for directions.

Other nearby markers. At least 8 other markers are within 3 miles of this marker, measured as the crow flies. Battle of Wisconsin Heights (within shouting distance of this marker); Mazomanie Sand Barrens (approx. half a mile away); Culver's (approx. 1.8 miles away); Sauk City 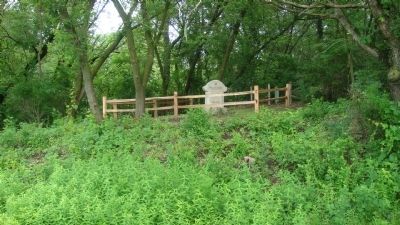