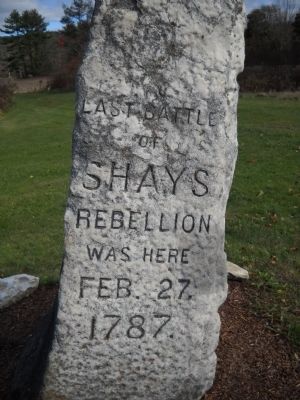 Topics. This historical marker is listed in this topic list: Notable Events. A significant historical date for this entry is February 27, 1787.

Most of [Continental Army General Benjamin] Lincoln’s army melted away in late February [1787] as enlistments expired, and he commanded only 30 men at a base in Pittsfield by the end of the month. In the meantime, some 120 rebels had regrouped in New Lebanon, New York, and they crossed the border on February 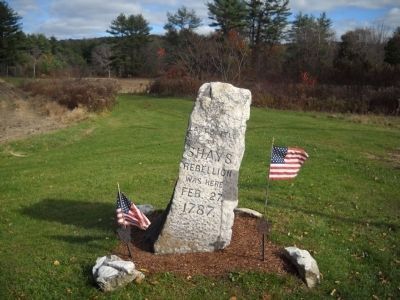 Click or scan to see
this page online
27, marching first on Stockbridge, Massachusetts, a major market town in the southwestern corner of the state. They raided the shops of merchants and the homes of merchants and local professionals. This came to the attention of Brigadier John Ashley, who mustered a force of some 80 men and caught up with the rebels in nearby Sheffield late in the day for the bloodiest encounter of the rebellion: 30 rebels were wounded (one mortally), at least one government soldier was killed, and many were wounded. Ashley was further reinforced after the encounter, and he reported taking 150 prisoners.

3. The Autobiography Manuscript of Major Amos Stoddard. 2016 book on Amazon.com with the “Look Inside” feature. Edited and with an introduction by Robert A. Stoddard. (Submitted on March 16, 2021.)

Additional commentary.
1. Amos Stoddard: A First-Hand Account of the Last Battle of Shays’ Rebellion
In his autobiography, written in 1812 and left unfinished in his military chest, and only recently (2016) published in the book The Autobiography Manuscript of Major Amos Stoddard, Major Stoddard provides his first-hand account of the events during 1787 involving Shays’ Rebellion and his role and participation as a volunteer in the militia raised to suppress the rebellion.

Amos Stoddard was a veteran of the American Revolution (so he therefore could empathize with the plight of some of the former fighters for Independence) and a supporter Massachusetts Governor Bowdoin and of good governance and the rule of law in general. He was placed in charge of an artillery piece and was involved in a standoff with insurgents at West Stockbridge just prior to the events of the “Last Battle.” Many of Stoddard’s childhood friends in Berkshire County did not appreciate his role in suppressing the rebellion when he came home to Lenox to look for men 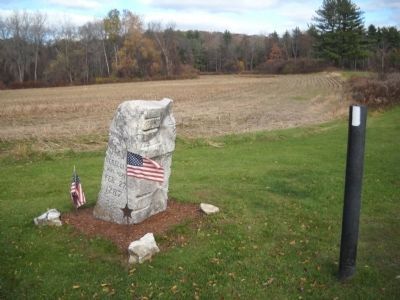 Photographed By Bill Coughlin, November 1, 2010
3. Shays Rebellion Marker
The marker is found along the Appalachian Trail. Note the white blaze on the pole to the right.
to recruit for the militia in February 1787. Many of his schoolmates supported the insurgents and Stoddard felt that his own safety was in jeopardy at that time — even in his hometown! The following is an excerpt from his handwritten autobiography (from the aforementioned book) describing the events leading to and describing what occurred at the “Last Battle of Shays’ Rebellion.”

Genl. Lincoln, with a considerable body of militias, arrived at Pittsfield, when those under Genl. Patterson, were deemed unnecessary, and permitted to return to their homes. As my connection with them was now dissolved, I conceived it best to open a rendezvous in Stockbridge, and to endeavor to obtain some recruits. During my stay there, a sudden inception of Insurgents, who had fled for protection to the state of New York, took place, and I was nearly falling into their hands. Their object was to seize some of the most influential characters in Stockbridge, particularly Mr. [Theodore] Sedgwick, and to liberate their friends confined in the goal [jail] at Great Barrington. A few moments warning enabled me to secure and mount my horse — the people fled in all directions — and as soon as I perceived, that they mediated a visit to Great Barrington, I hastened to that place before them. Not finding a sufficient number of men to oppose them, I rode to Sheffield and apprised Genl. Ashley of what was going on. He immediately rallied about 30 men — and as considerable time had been lost, we concluded it best, by a circuitous route to intercept them in the road heading from Great Barrington to the New York line, well aware that they would retire with all possible speed to their hiding place beyond the limits of our jurisdiction.

Soon after we entered the road, we perceived thirty or forty Sleighs approaching us, with about four men in each sleigh. 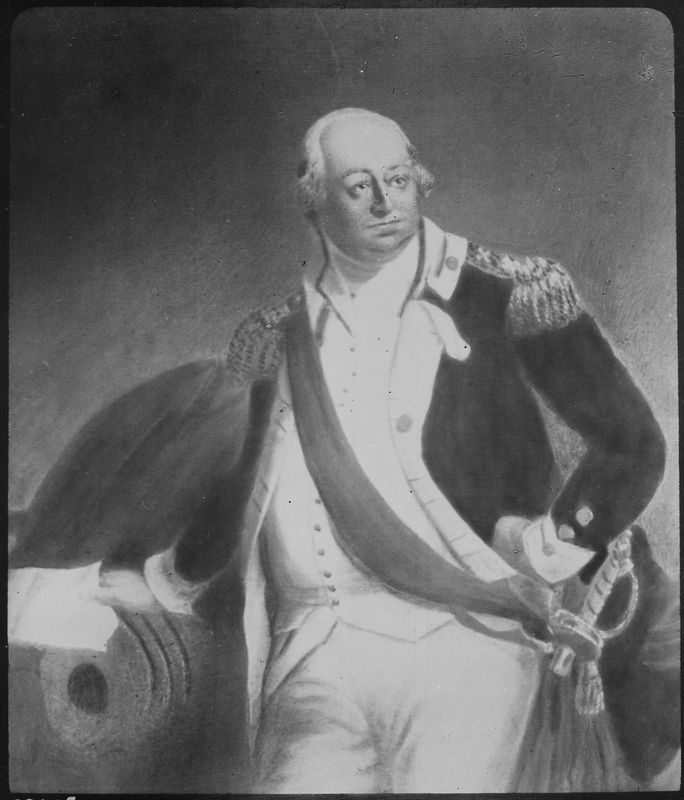 Portrait by Henry Sargent. National Archives Collection via Wikipedia Commons
4. General Benjamin Lincoln
We immediately dismounted and waited for them in an advantageous position. A man of our party, rather of a delicious disposition, fired on them as they approached, and wounded [Perez] Hamblin (sic), their leader, in the ankle. Several other shot were then fired by us, while they were endeavoring to disengage themselves from their Sleighs, and to form in front of them. Three or four others were slightly wounded —and Hamblin (sic) received another shot, which passed through his body. They then placed about 20 prisoners in their front, most of whom they had taken from Stockbridge, expecting by this means to check our fire. The prisoners, finding themselves between two fires, suddenly started for us, when one of them by the name of [Solomon] Gleason, with whom I boarded in Stockbridge, was shot dead by one of the Insurgents. The rest joined us, when the insurgents gave way —they had not time to rescue their horses and Sleighs — but precipitated themselves into the snow up to their middles, and finally disappeared in the woods. Those prisoners, whom they had liberated from Goal [jail], escaped with them. We immediately secured their horses and Sleighs, and returned to Great Barrington.