The Woman's Club of El Paso 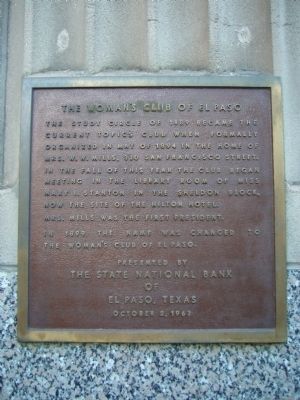 The Study Circle of 1889 became the Current Topics Club when formally organized in May of 1894 in the home of Mrs. W. W. Mills, 310 San Francisco Street. In the fall of this year the club began meeting in the library room of Miss Mary I. Stanton in the Sheldon Block, now the site of the Hilton Hotel. Mrs. Mills was the first president. In 1899 the name was changed to the Woman's Club of El Paso.

Erected 1963 by The State National Bank of El Paso.

Topics. This historical marker is listed in these topic lists: Fraternal or Sororal Organizations • Women. A significant historical month for this entry is May 1894.

Location. 31° 45.517′ N, 106° 29.33′ W. Marker is in El Paso, Texas, in El Paso County. Marker is on South El Paso Street, on the right when traveling north. Marker is mounted on the northwest corner of the Plaza Hotel. Touch for map. Marker is at or near this postal address: 106 East Mills Street, El Paso TX 79901, United States of America. Touch for directions.

Other nearby markers. At least 8 other markers are within walking distance of this marker. LULAC (here, next to this marker); El Paso's First Newspaper (a few steps from this marker); The First Kindergarten in Texas 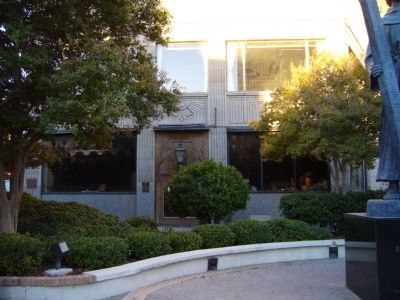 Photographed By Bill Kirchner, November 3, 2010
2. The Woman's Club of El Paso Marker
Marker is at far left in photo. 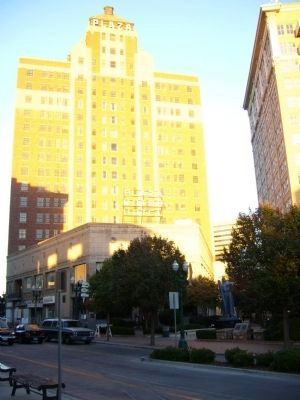