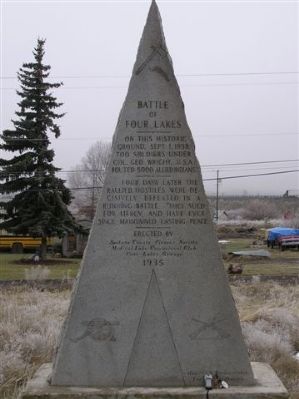 December 7, 2003
1. Battle of Four Lakes Marker
Inscription.
Battle of Four Lakes. . On this historic ground, Sept. 1, 1858, 700 soldiers under Col Geo. Wright, U.S.A. routed 5,000 allied indians.. Four days later, the rallied hostiles were decisively defeated in a running battle. They sued for mercy, and have ever since maintained lasting peace. . This historical marker was erected in 1935 by Spokane County Pioneer Society, Medical Lake Commercial Club, and Four Lakes Grange. It is in Four Lakes in Spokane County Washington

Four days later, the rallied hostiles were decisively defeated in a running battle. They sued for mercy, and have ever since maintained lasting peace.

Topics. This historical marker is listed in these topic lists: Military • Wars, US Indian. A significant historical month for this entry is September 1860.

Other nearby markers. At least 8 other markers are within 11 miles of this marker, measured as the crow flies. Lucy Friedlander Covington (approx. 5 miles away); The Battle of Spokane Plains (approx. 6.1 miles away); Colville - Walla Walla Road (approx. 10 miles away); Temple Beth Shalom (approx. 10.1

Regarding Battle of Four Lakes. In order to punish the Indians who humiliated and defeated Colonel Steptoe in August 1858, Colonel George Wright led a force of 700 men from Fort Walla Walla into Spokane Indian territory. Wright's troops were equipped with long-range rifles, which enabled them to shoot the Indians from long range. When the allied indians attacked in force on September 1, 1858, their usual hit-and-run tactics were ineffective because of these new guns. Their almost suicidal attacks on the Army column cost the Indians many warriors; the Army lost none.

The "allied indians" referred to on the marker was a force made up of indians from the Coeur d'Alene, Palouse, and Spokane Tribes.

Editor’s want-list for this marker. Wide area picture of the marker and its surroundings. • Can you help?
Share This Page.