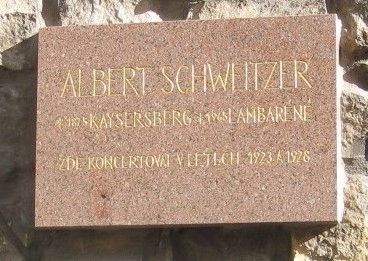 {Text translated into English:}
Albert Schweitzer
Born 1875 in Kaysersberg, died 1965 in Lambaréné
Performed here in 1923 and 1928 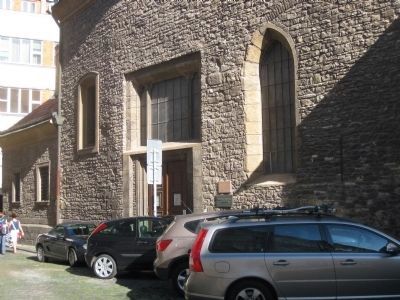 More about this marker. The marker is mounted to the right of the entrance of the church on V jirchářich (street) in the "New Town" section of Prague. The streets are rather narrow in this area, and are much easier to navigate on foot than by car.

Also see . . .
1. Church of St. Michal in Opatovice. Hundred-Spired Prague's web page for St. Michal Church. Includes an embedded 360 degree view of Prague from the church steeple. "..It is worth mentioning that the legendary philosopher, protestant theologist, musicologist, and above all humanist and doctor, professor Albert Schweitzer (1875-1965) played organ at the local German Evangelistic church of St. Michal during his Prague visit on 14th January 1923. The concert was repeated during his second Prague visit at the end of 1928. In his honour a memorial plaque was revealed on the outside wall of the church in 1993." (Submitted on November 19, 2010.)

2. Albert Schweitzer Biography. Nobel.org's biography of Schweitzer: "...Meanwhile he continued with a distinguished musical career initiated at an early age with piano and organ lessons. Only nine when he first performed in his father's church, he was, from his young manhood to his middle eighties, recognized as a concert organist, internationally known. From his professional engagements he earned funds for his education, particularly his later medical schooling, and for his African hospital. Musicologist as well as performer, Schweitzer wrote a biography of Bach in 1905 in French, published a book on organ building and playing in 1906, and rewrote the Bach book in German in 1908." (Submitted on November 19, 2010.)