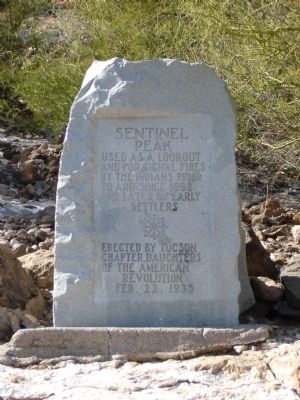 Photographed By Bill Kirchner, January 11, 2010
1. Sentinel Peak Marker
Inscription.
Sentinel Peak. . Used as a lookout and for signal fires by the Indians prior to and since 1692 and later by early settlers . This historical marker was erected in 1933 by Tucson Chapter, Daughters of the American Revolution. It is in Tucson in Pima County Arizona

Erected 1933 by Tucson Chapter, Daughters of the American Revolution.

Topics and series. This historical marker is listed in these topic lists: Exploration • Natural Features. In addition, it is included in the Daughters of the American Revolution (DAR) series list. A significant historical year for this entry is 1692. 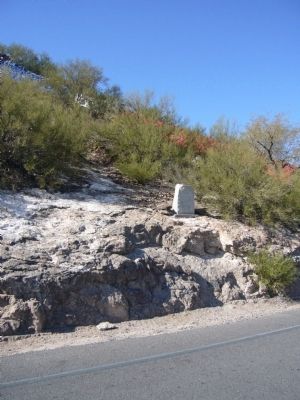 Photographed By Bill Kirchner, January 11, 2010
2. Sentinel Peak Marker
Marker is on west side of road.

Regarding Sentinel Peak. This site is marked as "B" on the Presidio Trail Walking Tour:
"To the west you will see a basalic peak adorned with the letter "A". This was once a lookout for Spanish and Native American sentinels who watched for raiders approaching the presidio and mission. The "A" was added in 1915, in a burst of University of Arizona student enthusiasm, as the result of a football victory over Pamona College. The O'Odham name for mountain, pronounced Schook-schon, means "at the black base." This is the source of the name Tucson."

Also see . . .  Sentinel Peak aka "A" Mountain. A Wikipedia article. Gives a history of the peak and details on how the peak became known by locals as "A" Mountain and it's attachment to The University of Arizona. (Submitted on January 19, 2010.) 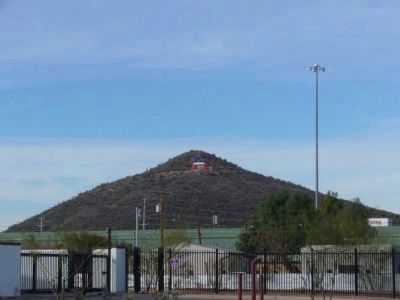 Photographed By Bill Kirchner, January 30, 2010
3. Sentinel Peak
View of "A" Mountain from the corner of South Granada Avenue and West Crushing Street. 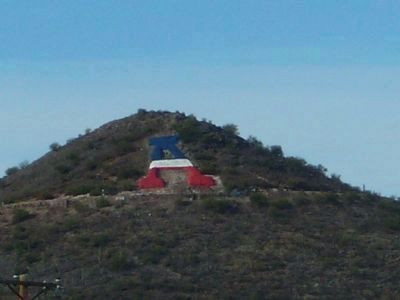 Photographed By Bill Kirchner, January 30, 2010
4. Sentinel Peak
View of "A" Mountain from South Granada Avenue & West Crushing Street. Camera is at 12x zoom. Marker is just to the left of the bottom of the "A". 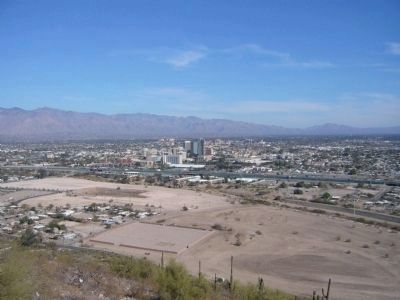