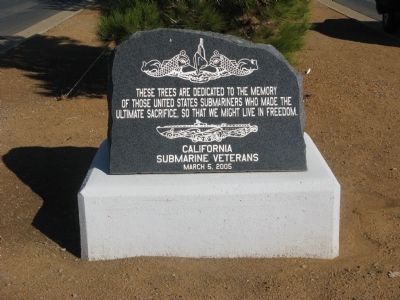 These trees are dedicated to the memory of those United States Submariners who made the ultimate sacrifice, so that we might live in freedom.

Topics and series. This historical marker memorial is listed in these topic lists: Military • Waterways & Vessels. In addition, it is included in the National Cemeteries, and the Still On Patrol series lists.

Location. 37° 6.915′ N, 121° 4.667′ W. Marker is in Gustine/Santa Nella, California, in Merced County. Marker is on West McCabe Road. Marker is located on the entrance drive of the San Joaquin Valley National Cemetery. Touch for map. Marker is at or near this postal address: 32053 West McCabe Road, Gustine CA 95322, United States of America. Touch for directions.

Other nearby markers. At least 8 other markers are within 11 miles of this marker, measured as the crow flies. San Joaquin Valley National Cemetery (about 400 feet away, measured in a direct line); First Marine Division – FMF (about 600 feet away); Pacheco Pass (approx. 2.7 miles away); 1843 - Rancho de San Luis Gonzaga - 1931 (approx. 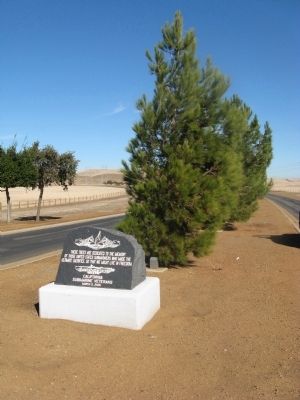