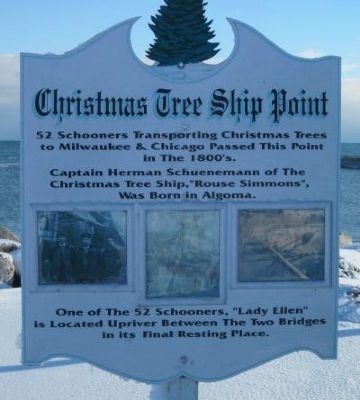 One of the 52 schooners, "Lady Ellen" is located upriver between the two bridges in its final resting place. . This historical marker is in Algoma in Kewaunee County Wisconsin

52 Schooners transporting Christmas trees to Milwaukee and Chicago passed this point in the 1800's.

One of the 52 schooners, "Lady Ellen" is located upriver between the two bridges in its final resting place.

Location. 44° 36.458′ N, 87° 25.923′ W. Marker is in Algoma, Wisconsin, in Kewaunee County. Marker can be reached from the intersection of Steele Street and Lake Street. During winter months the parking lot is not plowed but you can still walk to the marker. Touch for map. Marker is at or near this postal address: End of Steele Street, Algoma WI 54201, United States of America. Touch for directions.

Other nearby markers. At least 8 other markers are within 2 miles of this marker, measured as the crow flies. Schooner Daniel Lyons (here, next to this marker); Officer Ronald L. Leist (about 400 feet away, measured in a direct line); American Legion Park (approx. 0.2 miles away); The Church of St. Agnes-by-the-Lake (approx. 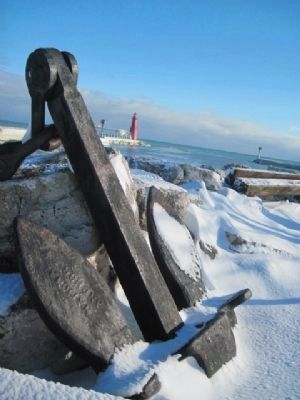 Regarding Christmas Tree Ship Point. Great Lakes ships carried nearly every commodity, and Christmas trees were no exception. Each year, several sailing ships ended their season by loading evergreens in northern Wisconsin or Michigan's Upper Peninsula, and setting sail for Chicago, where they offloaded their trees to end their shipping season. One of these ships was the Rouse Simmons. Following a raging storm that swept Lake Michigan, the Rouse Simmons and her crew were never seen again. Lost with all hands somewhere on the lake, the location of the Rouse Simmons' wreck would remain a mystery until 59 years later. 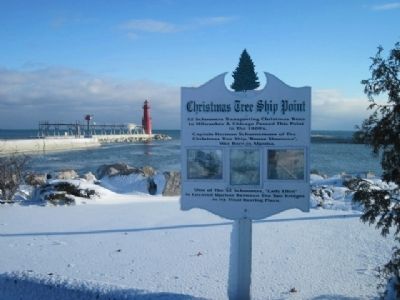 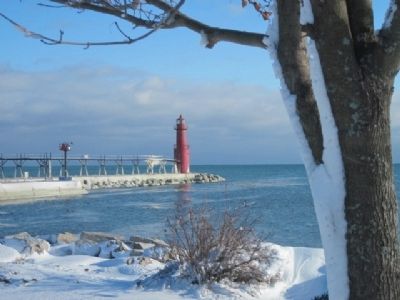