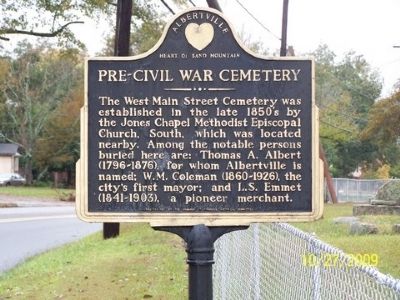 By David J Gaines, October 27, 2009
1. Pre-Civil War Cemetery Marker
Inscription.
Pre-Civil War Cemetery. . The West Main Street Cemetery was established in the late 1850’s by the Jones Chapel Methodist Episcopal Church, South, which was located nearby. Among notable persons buried here are: Thomas A. Albert (1796-1876), for whom Albertville is named; W. M. Coleman (1860-1926), the city’s first mayor; and L. S. Emmett (1841-1903), a pioneer merchant. . This historical marker was erected in 1971 by Chamber of Commerce Historical Committee. It is in Albertville in Marshall County Alabama

Location. 34° 16.177′ N, 86° 12.912′ W. Marker is in Albertville, Alabama, in Marshall County. Marker is on West Main Street (Alabama Route 205), on the right when traveling west. The marker is located on the roadside adjacent to the Albertville Cemetery. Touch for map. Marker is in this post office area: Albertville AL 35950, United States of America. Touch for directions.

Other nearby markers. At least 8 other markers are within 8 miles of this marker, measured as the crow flies. Albert Family (a few steps from this marker); A Celebration of 150 Years (within shouting distance of this marker); Seventh District Agricultural School 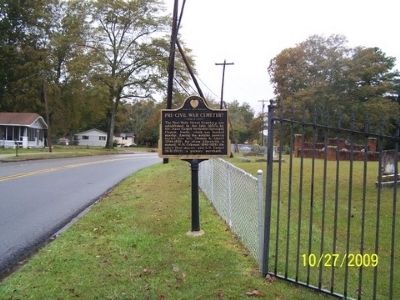 Also see . . .
1. Thomas Albert Grave. Albert's son-in-law, James Cicero Miller, named his post office "Albertville" in honor of his father-in-law, and it was from that post office that the City of Albertville grew. (Submitted on October 1, 2011, by Sandra Hughes of Killen, Alabama, USA.) 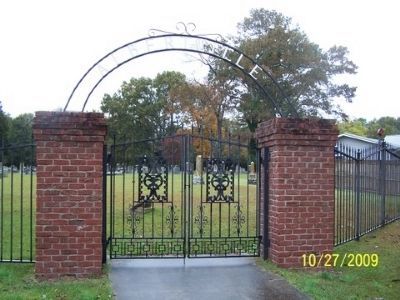 Editor’s want-list for this marker. Photos of the gravesites of persons mentioned in marker text. • Can you help?
Share This Page.