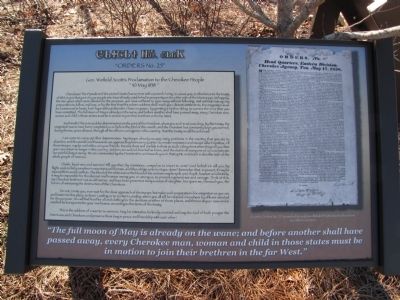 Cherokees! The President of the United States has sent me with a powerful army, to cause you, in obedience to the treaty of 1835, to join that part of your people who have already established in prosperity on the other side of the Mississippi. Unhappily, the two years which were allowed for the purpose, you have suffered to pass away without following, and without making any preparation to follow; and now, or by the time that this solemn address shall reach your distant settlements, the emigration must be commenced in haste, but I hope without disorder. I have no power, by granting a farther delay, to correct the error that you have committed. The full moon of May is already on the wane; and before another shall have passed away, every Cherokee man, woman and child in those states must be in motion to join their brethren in the far West.

My friends! This is no sudden determination on the part of the President, whom you and I must now obey. By the treaty, the emigration was to have been completed on or before the 23rd of this month; and the President has constantly kept you warned, during the two years allowed, through all his officers 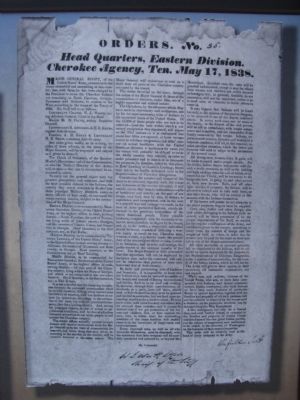 Photographed By Lee Hattabaugh, January 2, 2011
2. "Orders No. 25" Marker
Scott's 'Orders No. 25' provided his soldiers detailed instructions about how to enforce eviction.

Click or scan to see
this page online
and agents in this country, that the treaty would be enforced.

I am come to carry out that determination. My troops already occupy many positions in the country that you are to abandon, and thousands and thousands are approaching from every quarter, to render resistance and escape alike hopeless. All those troops, regular and militia, are your friends. Receive them and confide in them as such. Obey them when they tell you that your can remain no longer in this country. Soldiers are as kind-hearted as brave, and the desire of every one of us is to execute our painful duty in mercy. We are commanded by the President to act towards you in that spirit, and much is also the wish of the whole people of America.

Chiefs, head-men and warriors! Will you then, by resistance, compel us to resort to arms? God forbid! Or will you, by flight, seek to hid yourselves in mountains and forests, and thus oblige us to hunt you down? Remember that, in pursuit, it may be impossible to avoid conflicts. The blood of the white man or the blood of the red man may be spilt, and, if spilt, however accidentally, it may be impossible for the discreet and humane among you, or among us, to prevent a general war and carnage. Think of this, my Cherokee brethren! I am an old warrior, and have been present at many a scene of slaughter, but spare me, I beseech you, the horror of witnessing the destruction 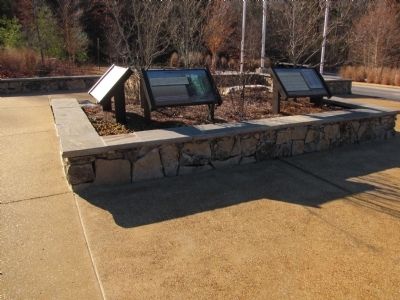 Photographed By Lee Hattabaugh, January 2, 2011
3. "Orders No. 25" Marker
Marker is on the right in this view.
of the Cherokees.

Do not, I invite you, even wait for the close approach of the troops; but make such preparations for emigration as you can and hasten to this place, to Ross' Landing or to Gunter's Landing, where you all will be received in kindness by officers selected for the purpose. You will find food for all and clothing for the destitute at either of those places, and thence at your ease and in comfort be transported to your new homes, according to the terms of the treaty.

This is the address of a warrior to warriors. May his entreaties be kindly received and may the God of both prosper the Americans and Cherokees and preserve them long in peace and friendship with each other!

"The full moon of May is already on the wane; and before another shall have passed away, every Cherokee man, woman and child in those states must be in motion to join their brethren in the far West."

Topics and series. This historical marker is listed in these topic lists: Native Americans • Settlements & Settlers • Wars, US Indian. In addition, it is included in the Trail of Tears series list. A significant historical year for this entry is 1835.

Location. 35° 24.423′ N, 85° 0.383′ W. Marker is near Birchwood, Tennessee, in Meigs County. Marker can be reached from Blythe Ferry Road, 2 miles north of Hiwassee Highway (Tennessee Highway 60), on the right when traveling north. Marker is located at the Cherokee Removal Memorial Park. Touch for map. Marker is in this post office area: Birchwood TN 37308, United States of America. Touch for directions.