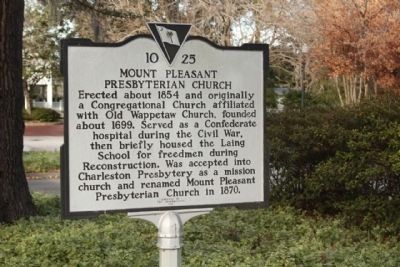 Erected about 1854 and originally a Congregational Church affiliated with Old Wappetaw Church, founded about 1699. Served as a Confederate hospital during the Civil War, then briefly housed the Laing School for freedmen during Reconstruction. Was accepted into Charleston Presbytery as a mission church and renamed Mount Pleasant Presbyterian Church in 1870.

Location. 32° 47.359′ N, 79° 52.692′ W. Marker is in Mount Pleasant, South Carolina, in Charleston County. Marker is on Hibben Street near Church Street, on the right when traveling west. Touch for map. Marker is at or near this postal address: 302 Hibben Steet, Mount Pleasant SC 29464, United States of America. Touch for directions.

Other nearby markers. At least 8 other markers are within walking distance of this marker. The Ferry Tract (about 600 feet away, measured in a direct line); The Whilden House / 54th Massachusetts Regiment (about 700 feet away); Etiwan Masonic Lodge (about 800 feet away); St. Andrew's Church 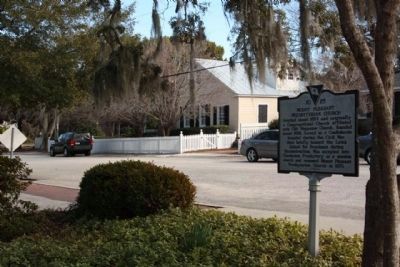 Related markers. Click here for a list of markers that are related to this marker. the relationship, other mentioned sites

Also see . . .  Mt. Pleasant Presbyterian Church (1867). Mount Pleasant Presbyterian Church was organized by a handful of Civil War survivors who struggled to keep it alive during some of the more difficult years in US history. The sanctuary had been completed in 1854 as a branch of the Independent of Congregational Church of Christ Church Parish, located about 13 miles to the north. Several years after the Civil War began in 1861, the building became a Confederate hospital. Before the war ended, possibly during the confederate evacuation of the area in 1865, a Union artillery shell burst overhead, raining small pieces of scrap iron down through its roof. The Wappetaw church building had been badly abused by troops bivouacked on the grounds and would never again serve a congregation. 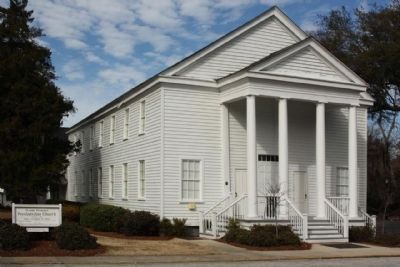 By Mike Stroud, January 2011
3. Mount Pleasant Presbyterian Church ,
its National Register of Historical Places medalion seen left of of doors
Most surviving members left the vicinity and relocated, some to Mount Pleasant. (Submitted on January 9, 2011, by Mike Stroud of Bluffton, South Carolina.) 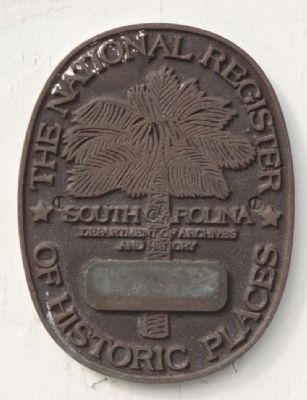 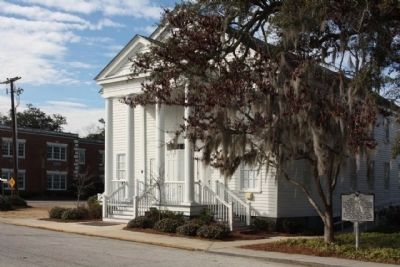