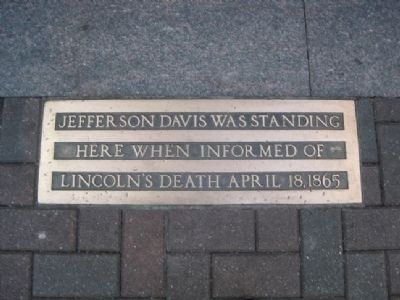 Topics and series. This historical marker is listed in this topic list: War, US Civil. In addition, it is included in the Former U.S. Presidents: #16 Abraham Lincoln series list. A significant historical month for this entry is April 1873.

Location. 35° 13.591′ N, 80° 50.653′ W. Marker is in Charlotte, North Carolina, in Mecklenburg County. Marker can be reached from the intersection of 4th Street and South Tryon Street, on the right when traveling south. Marker is brass and is embedded in the concrete sidewalk. You have to walk on the sidewalk to see it. Touch for map. Marker is in this post office area: Charlotte NC 28202, United States of America. Touch for directions.

Additional commentary.
1. Jefferson Davis in Charlotte
Jefferson Davis was giving a speech to the people of Charlotte at this site. The telegram handed to Jefferson Davis incorrectly stated the date of Lincoln's death as April 11. Lincoln was shot on Friday, April 14 and died the next day on April 15, 1865.
— Submitted January 22, 2011, by Tom Daoust of Concord, North Carolina.