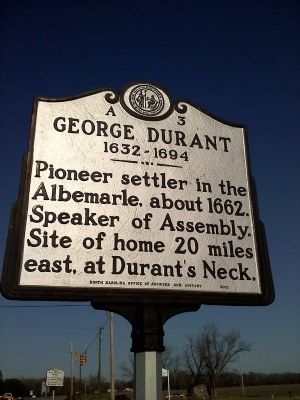 By James Thomson
1. George Durant Marker
Inscription.
George Durant. Pioneer settler in the Albemarle, about 1662. Speaker of the Assembly. Site of home 20 miles east, at Durant's Neck. . This historical marker was erected in 2003 by North Carolina Office of Archives and History. It is in Hertford in Perquimans County North Carolina

Pioneer settler in the Albemarle, about 1662. Speaker of the Assembly. Site of home 20 miles east, at Durant's Neck.

Erected 2003 by North Carolina Office of Archives and History. (Marker Number A-3.)

Topics and series. This historical marker is listed in these topic lists: Colonial Era • Government & Politics • Settlements & Settlers. In addition, it is included in the North Carolina Division of Archives and History series list. A significant historical year for this entry is 1662.

Location. 36° 12.233′ N, 76° 26.867′ W. Marker is in Hertford, North Carolina, in Perquimans County. Marker is at the intersection of Ocean Highway (U.S. 17) and New Hope Road, on the right when traveling north on Ocean Highway. Touch for map. Marker is in this post office area: Hertford NC 27944, United States of America. Touch for directions. 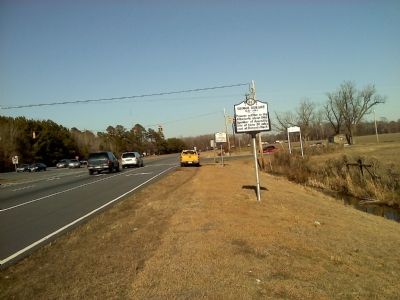