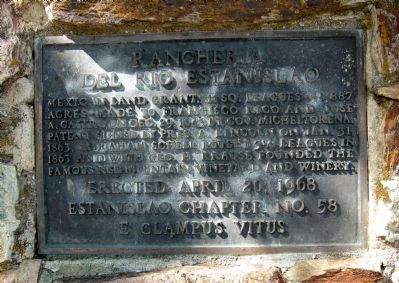 Topics and series. This historical marker is listed in these topic lists: Agriculture • Settlements & Settlers. In addition, it is included in the Chinese Heritage Sites of the American West, and the E Clampus Vitus series lists. A significant historical date for this entry is April 20, 1967.

Location. 37° 49.58′ N, 120° 40.914′ W. Marker is in Knights Ferry, California, in Stanislaus County. Marker is at the intersection of Sonora Road and Schell Road on Sonora Road. Touch for map. Marker is in this post office area: Oakdale CA 95361, United States of America. Touch for directions.

Other nearby markers. At least 8 other markers are within one mile of this marker, measured as the crow flies. Knights Ferry Hook & Ladder (approx. ¾ mile away); Knight's Ferry 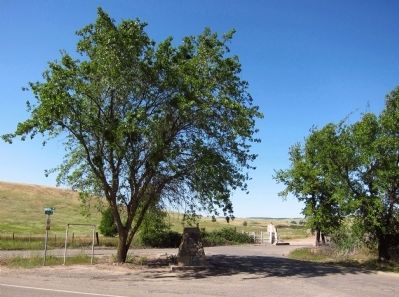 By Andrew Ruppenstein, April 30, 2011
2. Rancheria del Rio Estanislao Marker - wide view
The marker is mounted on a stone monument, located under a tree on a small triangular patch of land at the intersection of Sonora and Schell Roads. (Marker is visible here in the shadow beneath the tree). 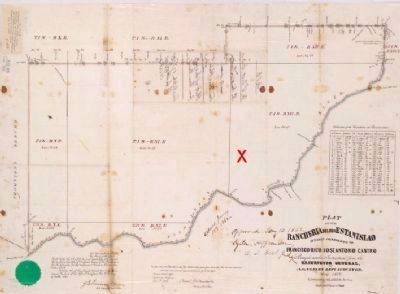 By US Surveyor General, January 10, 1862
3. Plat of Rancheria del Rio Estanislao
This image of the plat of the Rancheria del Rio Estanislao (courtesy of the Bancroft Library, University of California at Berkeley), produced by the US Surveyor General in 1862, gives some idea of the size of the nearly 49,000 acre grant. The red X denotes the marker site, and the town of Knight's Ferry, about a mile away, is located roughly at the upper part of the bend of the Stanislaus River that is below and to the right of the X. [Click on image to enlarge]
Credits. This page was last revised on February 20, 2021. It was originally submitted on May 1, 2011, by Andrew Ruppenstein of Sacramento, California. This page has been viewed 803 times since then and 34 times this year. Photos:   1, 2, 3. submitted on May 1, 2011, by Andrew Ruppenstein of Sacramento, California. • Syd Whittle was the editor who published this page.
Share this page.