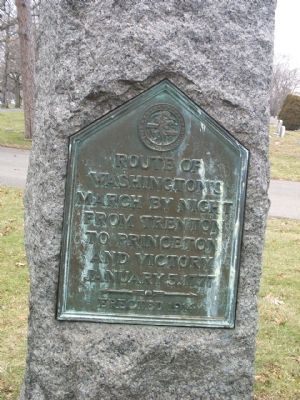 By Gary Nigh, December 2007
1. Route of Washington’s March Marker
Inscription.
Route of Washington’s march by night from Trenton to Princeton and victory January 3, 1777 . This historical marker was erected in 1914 by Sons of the American Revolution. It is in Hamilton Township in Mercer County New Jersey

Topics and series. This historical marker is listed in these topic lists: Roads & Vehicles • War, US Revolutionary. In addition, it is included in the Sons of the American Revolution series list. A significant historical date for this entry is January 3, 1777.

Location. 40° 13.68′ N, 74° 43.119′ W. Marker is in Hamilton Township, New Jersey, in Mercer County. Marker can be reached from Hamilton Ave. This marker is on a service road in the middle of Greenwood Cemetery. Touch for map. Marker is at or near this postal address: 1800 Hamilton Ave, Trenton NJ 08619, United States of America. Touch for directions. 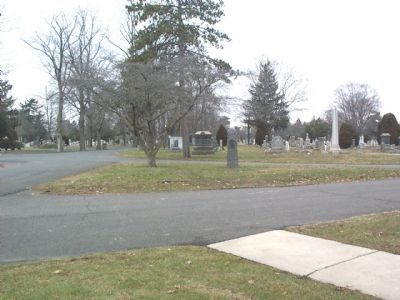 More about this marker. This is the third in a series of 12 markers between Trenton and Princeton.