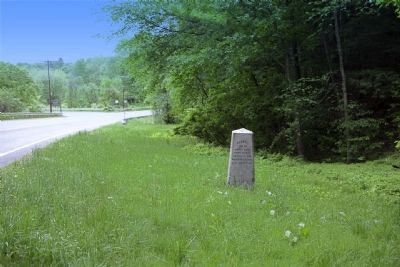 Nathaniel Dickinson lived here nineteen years in a fortified house but was scalped and killed by the Indians on April 15, 1747, at Pachaug Hill.

Location. Marker has been reported missing. It was located near 42° 42.943′ N, 72° 26.871′ W. Marker was in Northfield, Massachusetts, in Franklin County. Marker could be reached from U.S. 10. Touch for map. Marker was in this post office area: Northfield MA 01360, United States of America. Touch for directions.

Other nearby markers. At least 8 other markers are within 6 miles of this location, measured as the crow flies. First Settlement (approx. 1.9 miles away); King Philip's Hill (approx. 2.6 miles away); Indian Council Fires (approx. 3.8 miles away); Captain Richard Beers (approx. 4 miles away); Deacon Ebenezer Sheldon's Fort 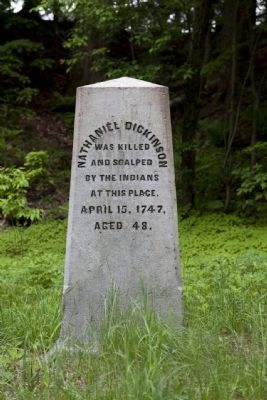 More about this marker. The location of this marker was near Pachaug Hill in Northfield, where there now stands a monument to commemorate the 1747 Indian massacre of the Dickinson party.

Additional comments.
1. The Line of Forts
This marker was placed at the site of one the forts established by Governor William Shirley, along the northern border of Massachusetts, as a defense against the French and their Indian allies. Construction of these forts or fortified houses immediately preceded the French & Indian War (1754-1763).