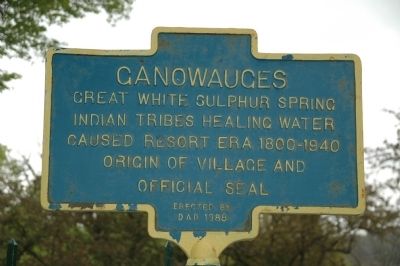 
Erected 1988 by Daughters of the American Revolution.

Location. 42° 51.203′ N, 74° 58.975′ W. Marker is in Richfield Springs, New York, in Otsego County. Marker is on East Main Street (U.S. 20), on the right when traveling west. Mark is in the municipal park, Spring Park, a short distance from the stone fountain at the edge of the sidewalk. Touch for map. Marker is in this post office area: Richfield Springs NY 13439, United States of America. Touch for directions.

More about this marker. A metal fence forms an enclosure around the spring, the marker is mounted beside this enclosure. 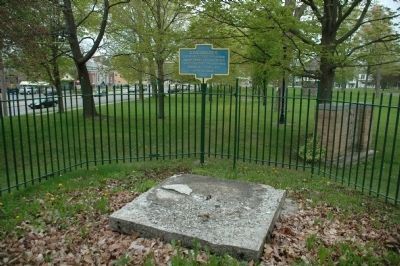 By Howard C. Ohlhous, May 14, 2011
2. Ganowauges Marker at the Great White Sulphur Spring
of the village of Richfield Springs is closely tied to the sulphur springs located there...

The sulphur springs around which the village of Richfield Springs developed were well known to the Iroquois, who used the Ganowauges (stinking waters) as a curative to threat frostbite and other ailments. The springs are believed to have been discovered by Europeans in 1754; however, the location did not become the focus of permanent settlement until the 1790s. In 1791-92, William Turncliff built a small sawmill and gristmill near the western edge of the village and, a short time later, C. Robinson established a store at the corner of West Main and Elm Streets, where St. John's Church now stands. The extension of the Third Great Western Turnpike (now US Route 20) through the settlement in 1808 brought greater exposure to the springs and encouraged additional development, including construction of the Richfield Hotel on Main Street in 1816 (no longer extant).

The commercial promotion of the sulphur springs was initiated by Dr. Horace Manley, who purchased the site of the Great White Sulphur Springs in 1820. Manley built a bath house at this site the following year and brought twenty-five patients to take the water cure. As the springs grew in popularity, demand for lodgings increased, supporting construction of new and larger hotels. Hotels and associated business establishments 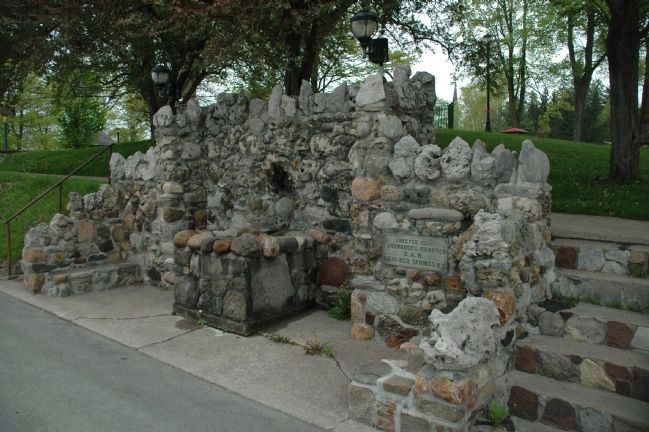 By Howard C. Ohlhous, May 14, 2011
3. The Great White Sulphur Spring
This stone fountain, located beside the roadway, was erected in 1931 by the Ganowauges Chapter D. A. R. of Richfield Springs. The stone steps on the right lead up to the slightly elevated sidewalk at the edge of the park, Spring Park. The spring itself, the metal fence around it, and the Marker are just a short distance behind this fountain. You can sample the waters at the fountain if you wish. The sulfur smell at the fountain is quite pungent.
were built along both sides of the turnpike, where a thriving Main Street business district also emerged. Residential construction occurred throughout the village but eventually coalesced into several distinct neighborhoods, separate from but immediately adjacent to the business district. These residential enclaves included areas on James Street, East Main Street and Church Street.

Richfield Springs prospered as a mineral springs spa and by mid-century the village included a number of large hotels with capacities ranging from one hundred to five hundred guests. Richfield Springs incorporated as a village in 1861 with a permanent population of approximately four hundred. In 1870 a branch of the Delaware, Lackawanna and Western Railroad was brought to the southern edge of the village, facilitating transportation to the resorts from major urban centers in the northwest and midwest. The railroad heralded a new era of growth and prosperity in the village that continued into the first decade of the twentieth century. New hotels and boarding houses were built to accommodate the two to three thousand guests who arrived each summer, and expensive summer estates were built in and around the village by prominent industrialists and businessmen, including Cyrus McCormick of McCormick Harvester Co. By 1890, the year-round population of the village had increased four-fold to more than sixteen hundred residents. Although the medicinal qualities of the sulphur springs continued to be a significant attraction, the village also emerged as a popular summer gathering place for individuals of wealth. Among the more prominent summer residents and guests of the resort were Richard C. Croker, the infamous boss of New York's Tammany Hall, General George McClellan and General Joe Hooker, Admiral George Dewey, inventor Thomas Edison, and writers Sarah Orne Jewitt and Oscar Wilde.

The destruction of the massive Spring House Hotel by fire in 1897 and the decision not to rebuild were turning points in the history of the village. Although Richfield Springs remained viable as a resort well into the first decades of the twentieth century, both seasonal and permanent populations began a slow but steady decline. An electric railroad connected the village with Oneonta and Cooperstown in 1902 and the local economy was supplanted by light manufacturing and a creamery complex built at the south edge of the village.

Automobile transportation became commonplace in the village in the 1920s, bringing another wave of tourists. However, the economic depression of the 1930s stifled new construction in the village and hastened the loss of many of the large-scale hotels and their dependencies.