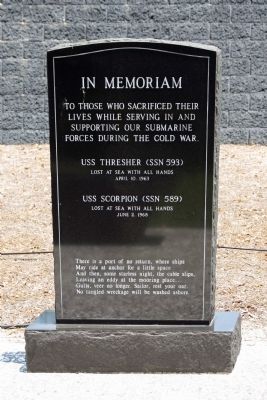 In Memoriam
To those who sacrificed their
lives while serving in and
supporting our submarine
forces during the Cold War.

There is a port of no return, where ships
May ride at anchor for a little space
And then, some starless night, the cable slips,
Leaving an eddy at the mooring place.....
Gulls, veer no longer. Sailor, rest your oar.
No tangled wreckage will be washed ashore.

Topics and series. This historical marker is listed in these topic lists: War, Cold • Waterways & Vessels. In addition, it is included in the Still On Patrol series list. A significant historical date for this entry is April 10, 1963. 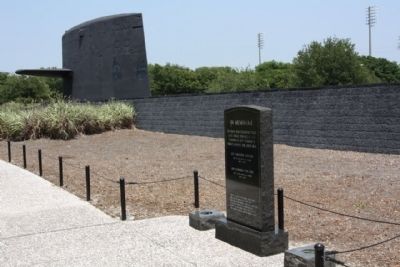 More about this marker. Poem on marker is the second stanza of “Lost Harbor,” by Leslie Nelson Jennings.

Also see . . .  USS Scorpion (SSN-589), Wikipedia entry. ... For an unusually long period of time, beginning shortly before midnight on 20 May and ending after midnight 21 May, Scorpion was attempting to send radio traffic to Naval Station Rota in Spain but was only able to reach a Navy communications station in Nea Makri, Greece, which forwarded Scorpion's messages to SUBLANT. Six days later, she was reported overdue at Norfolk. Navy personnel suspected possible failure and launched a search. (Submitted on May 28, 2011, by Mike Stroud of Bluffton, South Carolina.) 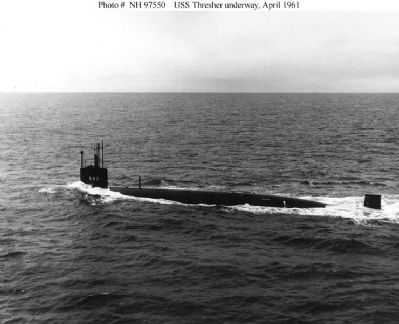 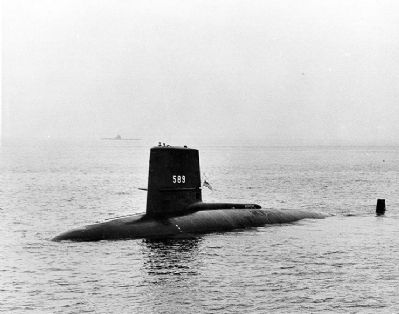