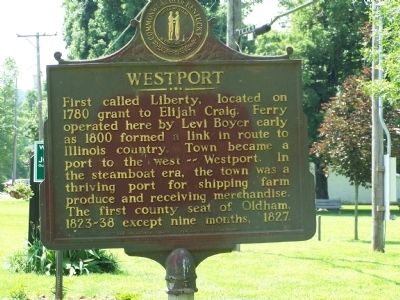 By M. Bowyer, May 30, 2011
1. Westport Marker
Inscription.
Westport. . First called Liberty, located on 1780 grant to Elijah Craig. Ferry operated here by Levi Boyer early as 1800 formed a link in route to Illinois country. Town became a port to the west -- Westport. In the steamboat era, the town was a thriving port for shipping farm produce and receiving merchandise. The first county seat of Oldham, 1823-38 except nine months, 1827. . This historical marker was erected in 1966 by Kentucky Historical Society, Kentucky Department of Highways. It is in Westport in Oldham County Kentucky

First called Liberty, located on 1780 grant to Elijah Craig. Ferry operated here by Levi Boyer early as 1800 formed a link in route to Illinois country. Town became a port to the west -- Westport. In the steamboat era, the town was a thriving port for shipping farm produce and receiving merchandise. The first county seat of Oldham, 1823-38 except nine months, 1827.

Topics and series. This historical marker is listed in these topic lists: Settlements & Settlers • Waterways & Vessels. In addition, it is included in the Kentucky Historical Society series list. A significant historical year for this entry is 1780.

Other nearby markers. At least 8 other markers are within 8 miles of this marker, measured as the crow flies. Woodland Farm (approx. 1.4 miles away); Lagrange Training School / Rosenwald Schools (approx. 6.7 miles away); Oldham County, 1824 (approx. 7 miles away); Funk Seminary Site 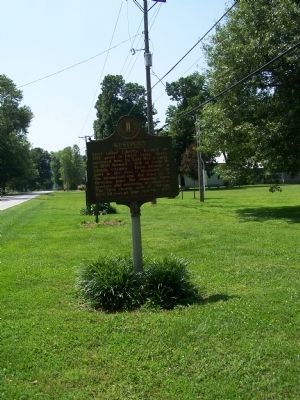 
"My grandfather's name was Levi Bowyer. His family came from Wales, and settled in Pennsylvania. He was born in 1773 near Harrisburg, Pa. When very young he went to Kentucky, where he met and married Anna Kemper. She was born in Fauquier Co., Va. Jan. 13, 1782. She had immigrated with her parents, Tillman and Dinah Hitt Kemper, to Fayette Co., Ky., near Old Lexington, Ky.

My grandparent's first child was a boy who died in infancy. The next four children, Navy, Ibbe, Lavina and Availla, were all born in Kentucky. Then they moved to Zanesville, Ohio (near) where Allen Bowyer was born in 1808. Later they all went to Cincinnati, Ohio, at that time a small village of log cabins. While there grandfather Levi Bowyer built a 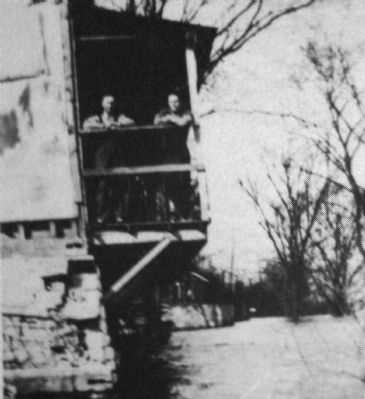 Taken from Bowyer family genealogy, August 14, 2010
3. Bowyer's Ferry Landing
Built about 1810. Made of huge logs, with the first story build of stone, facing the river. Two large stone chimneys for fieplaces, one on each end of the house. The first floor over the stone porch was even with the upper bank or hillside in the back. The front had a full length porch, where people sat, visited and waited for the boat. The stone room was used for store and mail from mailboats that was distributed out in the area to the settlers by post rider.
houseboat, moved the family onto it and floated down the Ohio River, looking for a location. He tied it ashore on the Indiana side, opposite another little settlement known as Westport, Ky.

After prospecting some time, he walked to Old Vincennes, the seat of the government of Indian Territory. There at the land office, he put in his claim for a thousand acre tract of land, which is now a part of Owen Township, Clark County, Ind., including the Bowyer Ferry Landing.

When he returned from Old Vincennes, he tore the cabin off his boat, carried it up the bank and built an open camp or cabin. There with the remains of his boat he established Bowyer Ferry. I talked with an old settler, Morton Adams, who told me he had crossed the river at Bowyer's Ferry in 1809. So Grandad Levi Bowyer was running his ferry boat then to Westport, Ky., but Mr. Adams did not know how long it was running before he rode on it.

When there seemed to be danger of Indian raids, the settlers sent their women and children across the river to Westport, Ky., for protection, while Grandad stayed on the Indiana side to scout and pass the word on when it was safe for them to return. Then he stayed on guard at the blockhouse. He belonged to the Militia Guards during the time of the Pigeon Roost Massacre, 1812.

Grandfather Levi was a wheelwright by trade. I remember seeing old women using his spinning wheels, spinning the rolls of wool and 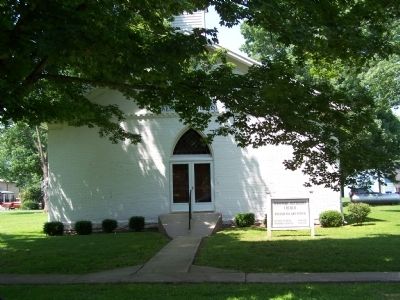 By M. Bowyer, May 30, 2011
4. Church next to the Westport Marker
flax. In that day they had to make all the clothing worn by the whole family.

I remember seeing my grandfather. He was a small man, very quick and active. He died in 1850. My grandmother Anna died in 1858. They are both buried in the old Bowyer Family burying ground, on top of the Ohio River Hill, overlooking the Ferry Landing. Six of their twelve children were born at the Landing, in what is now Owen Township, Clark County, Indiana. Their descendants lived in Owen Township, Sellersburg, Jeffersonville, and many other places. Also in Jefferson County, Kentucky." 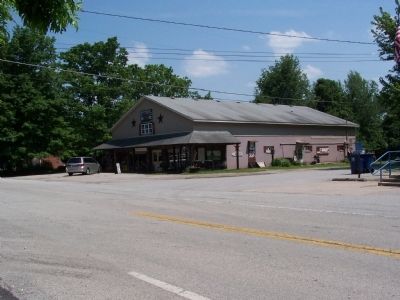