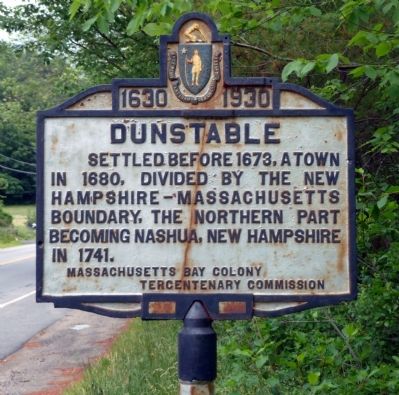 By Roger W. Sinnott, June 14, 2011
1. Dunstable Marker
Inscription.
Dunstable. Settled before 1673, a town in 1680, divided by the New Hampshire – Massachusetts boundary, the northern part becoming Nashua, New Hampshire in 1741. . This historical marker was erected in 1930 by the Massachusetts Bay Colony Tercentenary Commission. It is in Dunstable in Middlesex County Massachusetts

Settled before 1673, a town in 1680, divided by the New Hampshire – Massachusetts boundary, the northern part becoming Nashua, New Hampshire in 1741.

Topics and series. This historical marker is listed in these topic lists: Colonial Era • Settlements & Settlers. In addition, it is included in the Massachusetts Bay Colony—Tercentenary Commission Markers series list. A significant historical year for this entry is 1673.

Location. 42° 40.142′ N, 71° 31.942′ W. Marker is in Dunstable, Massachusetts, in Middlesex County. Marker is on Pleasant Street (Massachusetts Route 113), on the right when traveling east. Marker is just at the town line as you leave Pepperell and enter Dunstable. Touch for map. Marker is in this post office area: Dunstable MA 01827, United States of America. Touch for directions.

Other nearby markers. At least 8 other markers are within 8 miles of this marker, measured as the crow flies. John Tinker / John Shattuck (approx. 4.2 miles away); a different marker also named Dunstable (approx. 4.3 miles away); Parker House (approx. 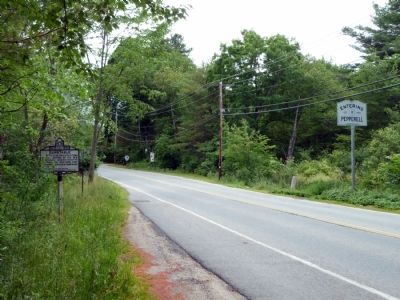 By Roger W. Sinnott, June 14, 2011
2. View When Leaving Dunstable for Pepperell
This picture shows the other side of the marker, which reads the same.

Also see . . .
1. Wikipedia entry. An overview of the town today, plus some of its history. (Submitted on June 14, 2011, by Roger W. Sinnott of Chelmsford, Massachusetts.)