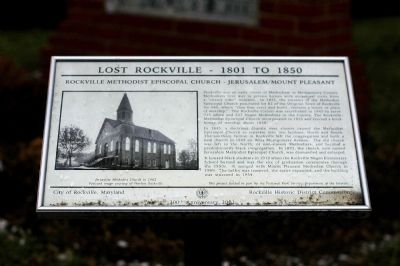 Rockville was an early center of Methodism in Montgomery County. Methodists first met in private homes with occasional visits from a "circuit rider" minister. In 1835, the trustees of the Methodist Episcopal Church purchased lot 82 of the Original Town of Rockville for $40, where "they may erect and build…thereon a house or place of worship." The Rockville Circuit was established in 1845 to serve 715 white and 527 Negro Methodists. The Rockville Methodist Episcopal Church incorporated in 1852 and erected a brick house of worship about 1858.

In 1845, a doctrinal dispute over slavery caused the Methodist Episcopal Church to separate into two factions, North and South. The southern faction in Rockville left the congregation and built a new church in 1868 on West Montgomery Avenue. The old church was left to the North, or non-slavery Methodists, and became a predominantly black congregation. In 1892, the church, now named Jerusalem Methodist Episcopal Church, was dismantled and enlarged. 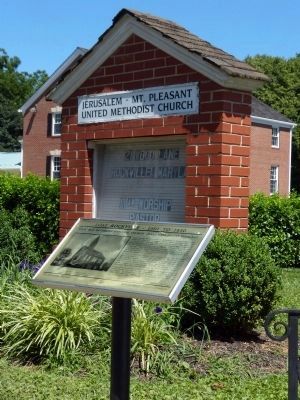 Click or scan to see
this page online
1950s. It merged with Mount Pleasant Methodist Church in 1989. The belfry was removed, the stairs expanded, and the building was stuccoed in 1954.

Erected 2001 by City of Rockville, Maryland, and the Rockville Historic District Commission.

Topics and series. This historical marker is listed in these topic lists: African Americans • Churches & Religion • Notable Buildings. In addition, it is included in the Maryland, Lost Rockville – 1801 to 1850 series list. A significant historical year for this entry is 1835.

Location. 39° 5.155′ N, 77° 9.226′ W. Marker is in Rockville, Maryland, in Montgomery County. Marker is on Wood Lane near North Washington Street, on the right when traveling west. Touch for map. Marker is in this post office area: Rockville MD 20850, United States of America. Touch for directions. 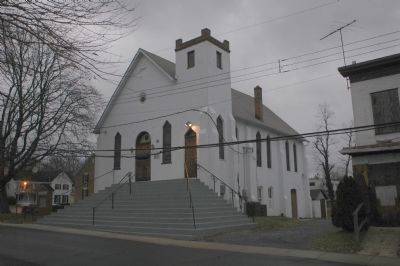 By Tom Fuchs, January 14, 2006
3. Jerusalem / Mount Pleasant United Methodist Church
This marker can be seen to the right of the church at sidewalk level. A second marker is on the wall to the left of the main set of doors.
(about 400 feet away); Higgins House (about 400 feet away). Touch for a list and map of all markers in Rockville. 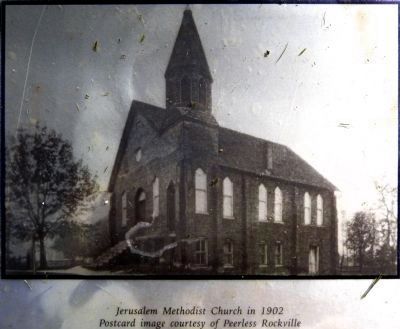 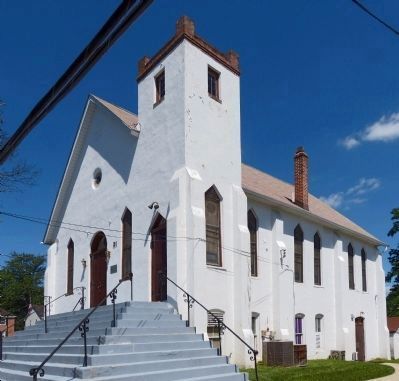 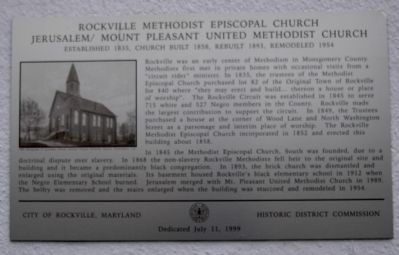 By Tom Fuchs, January 14, 2006
6. Duplicate Marker on Church Wall
This marker, found to the right of the main doors, contains the same inscription and photograph. It was Dedicated July 11, 1999 by the City of Rockville, Historic District Commission. 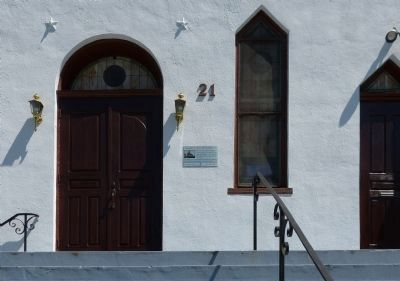