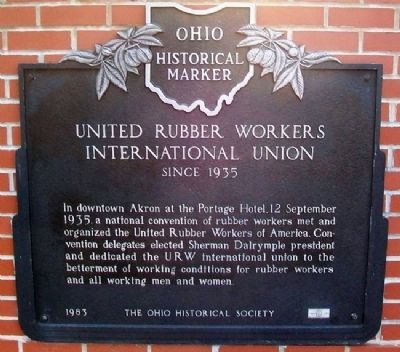 In downtown Akron at the Portage Hotel, 12 September 1935, a national convention of rubber workers met and organized the United Rubber Workers of America. Convention delegates elected Sherman Dalrymple president and dedicated the URW international union to the betterment of working conditions for rubber workers and all working men and women.

Erected 1983 by The Ohio Historical Society.

Topics. This historical marker is listed in these topic lists: Industry & Commerce • Labor Unions. A significant historical date for this entry is September 12, 1935.

Location. 41° 5.167′ N, 81° 31.003′ W. Marker is in Akron, Ohio, in Summit County. Marker is on Main Street, on the left when traveling north. Marker is adjacent to a large flagpole and backed by a large corporate parking lot. Touch for map. Marker is at or near this postal address: 31 North Main Street, Akron OH 44308, United States of America. Touch for directions.

Other nearby markers. At least 8 other markers are within walking distance of this marker. Creating Crossroads of Commerce (about 400 feet away, measured in a direct line); Howard Street District (about 500 feet away); Site of Sojourner Truth's Speech on Women's Rights 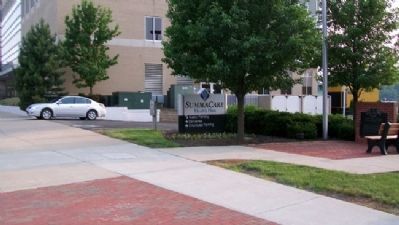 More about this marker. The marker is a standard Ohio Historical Marker but is unnumbered and painted black and silver instead of the normal brown and gold color scheme.