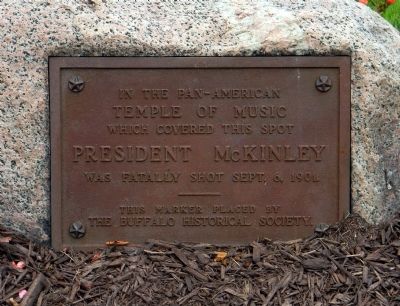 Photographed By Paul Crumlish, June 26, 2011
1. Detail of the President McKinley Marker
Inscription.
President McKinley. .
In the Pan-American Temple of Music which covered this spot President McKinley was fatally shot Sept. 6, 1901.. . This historical marker was erected in 1921 by the Buffalo Historical Society. It is in Buffalo in Erie County New York

In the Pan-American
Temple of Music
which covered this spot
President McKinley
was fatally shot Sept. 6, 1901.

Erected 1921 by the Buffalo Historical Society.

Topics and series. This historical marker is listed in this topic list: Notable Events. In addition, it is included in the Former U.S. Presidents: #25 William McKinley series list. A significant historical month for this entry is September 1936. 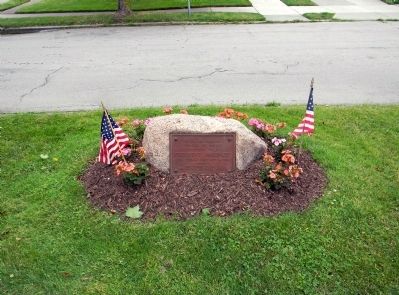 Also see . . .
1. "Lights Out in the City of Light"- Anarchy and Assassination at the Pan-American Exposition. Wayback Machine website entry (Submitted on June 28, 2011, by PaulwC3 of Northern, Virginia.) 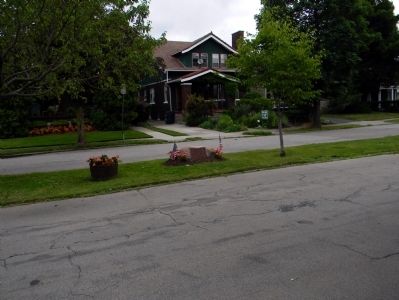 Photographed By Paul Crumlish, June 26, 2011
3. Wide view of the President McKinley Marker
The well-maintained marker lies in the median of a quiet street in the Lincoln Park neighborhood. 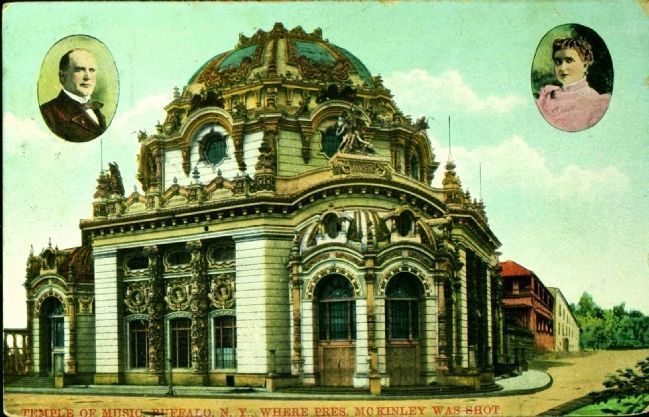 Postcard by David Ellis, Publisher, circa 1908
4. Temple of Music, Buffalo, N.Y., Where Pres. McKinley Was Shot 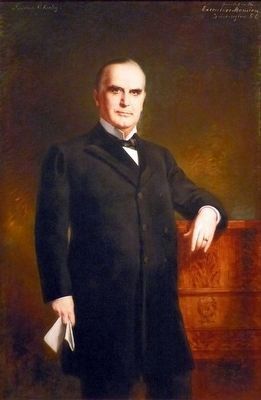 “William McKinley's ‘front porch‘ campaign for the White House in 1896 consisted mainly of speeches delivered to well-wishers flocking by train to his Canton, Ohio, home. As president, the main focus of his administration lay in responding to calls for aid in Cuba's struggle against Spanish rule. Although reluctant to meddle, McKinley felt obliged to act when the American battleship Maine blew up in Havana harbor, and interventionists blamed it on the Spanish. The result was the Spanish-American War, which led to Cuba's independence and Spain's surrender of the Philippines, Puerto Rico, and Guam to the United States. Despite his own doubts about this turn of events, McKinley made the traditionally isolationist United States more visible in international politics.

One of several portraits derived from 1897-98 sittings at the White House, August Benziger's likeness testifies to McKinley's blandly funereal appearance. But housed in that uninteresting exterior was an unusual supply of warmth and charm that, as one observer put it, made McKinley ‘a marvelous manager of men.’” — National Portrait Gallery
Credits. This page was last revised on January 2, 2022. It was originally submitted on June 28, 2011, by PaulwC3 of Northern, Virginia. This page has been viewed 1,574 times since then and 72 times this year. It was the Marker of the Week September 6, 2015. Photos:   1, 2, 3. submitted on June 28, 2011, by PaulwC3 of Northern, Virginia.   4. submitted on January 1, 2015.   5. submitted on September 9, 2015, by Allen C. Browne of Silver Spring, Maryland.
Share this page.