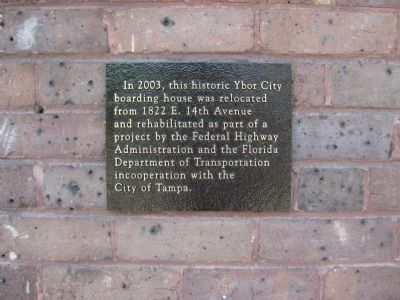 Photographed By AGS Media, June 23, 2011
1. Cueto Boarding House Marker
Inscription.
Cueto Boarding House. . In 2003, this historic Ybor City boarding house was relocated from 1822 E. 14th Avenue and rehabilitated as part of a project by the Federal Highway Administration and the Florida Department of Transportation incooperation with the City of Tampa. . This historical marker is in Tampa in Hillsborough County Florida

In 2003, this historic Ybor City boarding house was relocated from 1822 E. 14th Avenue and rehabilitated as part of a project by the Federal Highway Administration and the Florida Department of Transportation incooperation with the City of Tampa.

Topics. This historical marker is listed in these topic lists: Industry & Commerce • Roads & Vehicles. A significant historical year for this entry is 2003. 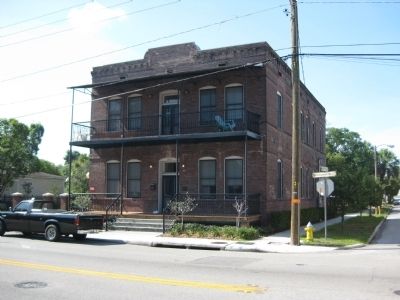 Photographed By AGS Media, June 23, 2011
2. Cueto Boarding House Marker
The marker is seen just to the right of the front door.

More about this marker. The marker is mounted on the front of the building, just to the right when facing the front entry door.

Regarding Cueto Boarding House. The Cueto Boarding House (also known as the Cueto-Fernandez Boarding House) is a restored, two-story brick building and one of the few remaining examples of the boarding houses that were once common in the area. These buildings were used to lodge newly arrived cigar factory workers in the Ybor City neighborhood. It was originally built in 1909.

Originally located five blocks west and one block south, at the corner of East 14th Avenue and North 18th Street, the building found itself in the way of construction to widen of Interstate 4. Very carefully, the two-story structure was lifted off its foundation and placed on a large rolling platform, which was then towed to the building's present location in 2003. A restoration project for the building then commenced and was finally completed in 2008. 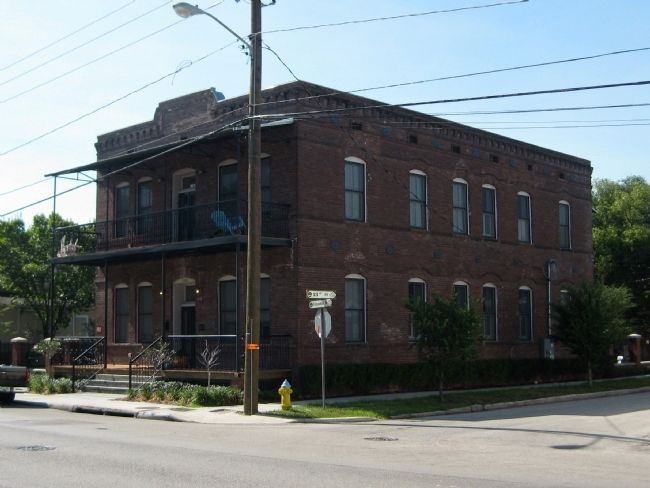 Photographed By AGS Media, June 23, 2011
3. Cueto Boarding House
1. Wording on the marker profile
The use of incooperation has been taken verbatim from the marker.
— Submitted July 15, 2021, by Devry Becker Jones of Washington, District of Columbia. 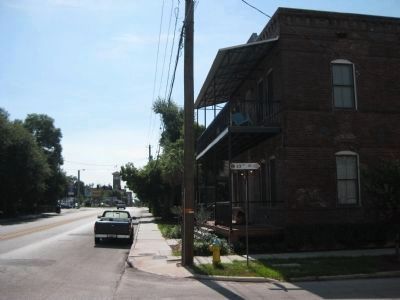 Photographed By AGS Media, June 23, 2011
4. Cueto Boarding House
Seen at the corner of North 13th Street, looking east along Columbus Drive. In the distance is seen a clock tower atop one of the area's cigar factories. 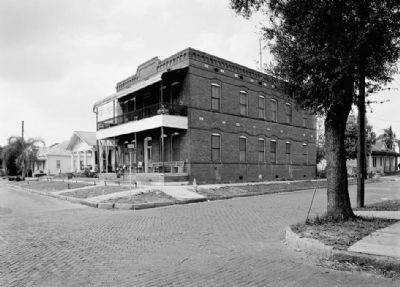 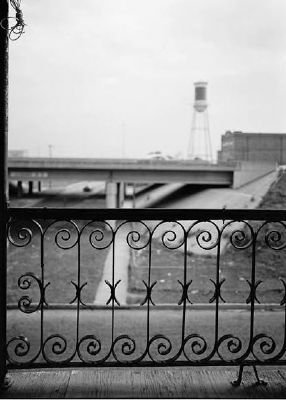 Walter Smalling, Jr. - Historic American Buildings Survey, 1979
6. View from the Cueto Boarding House
This detail of the building's wrought iron balcony railing shows the view from its original location. The highway overpass seen here belongs to U.S. Interstate 4. The eventual widening of that highway required the building's relocation to its current site.
Courtesy Library of Congress
Credits. This page was last revised on July 15, 2021. It was originally submitted on July 2, 2011, by Glenn Sheffield of Tampa, Florida. This page has been viewed 739 times since then and 37 times this year. Photos:   1, 2, 3, 4, 5, 6. submitted on July 2, 2011, by Glenn Sheffield of Tampa, Florida. • Bill Pfingsten was the editor who published this page.
Share this page.