Followed by a list of 188 men identified by Name, Rank, Ship/Unit, and Date of Death. . This historical marker was erected in 2005. It is in Halifax in Halifax Regional Municipality Nova Scotia

These men died in captivity while serving the United States of America on land and sea during the War of 1812. They lie in unmarked graves here on Deadman's Island.

Followed by a list of 188 men identified by Name, Rank, Ship/Unit, and Date of Death.

Topics. This historical marker is listed in these topic lists: Cemeteries & Burial Sites • War of 1812.

Location. 44° 38.091′ N, 63° 36.667′ W. Marker is in Halifax, Nova Scotia, in Halifax Regional Municipality. Marker can be reached from Pinehaven Drive 0.1 kilometers east of Purcell's Cove Road, on the right when traveling west. Deadman's Island Civic Park is marked by a sign on Pinehaven Drive at the trailhead. where there is 2-hour street parking for three or four cars. Deadman's Island is actually a peninsula of about 2.5 acres and is reached by a sloping trail. Touch for map. Marker is at or near this postal address: 24 Pinehaven Drive, Halifax, Nova Scotia B3P 1B3, Canada. Touch for directions.

Other nearby markers. At least 8 other markers are within 3 kilometers of this marker, measured as the crow flies. William Henry Chase (approx. 1.4 kilometers away); Halifax and Castine / Halifax et Castine 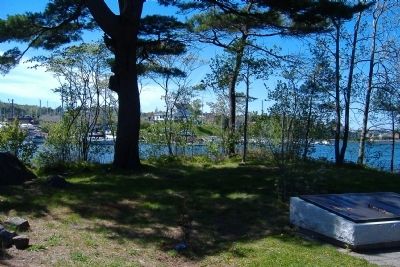 Regarding Deadman's Island. Almost 10,000 American seamen and soldiers who had been captured from ships or on shore by the British during the War of 1812 were held prisoner on nearby Melville Island. Approximately 195 men died and were buried in unmarked graves here. Deadman's Island was originally called Target Island when it was used for artillery practice. 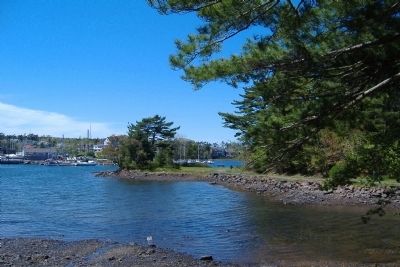