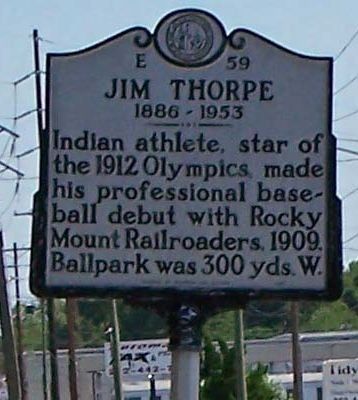 By Mike Stroud, 2011
1. Jim Thorpe Marker
Inscription.
Jim Thorpe. Indian athlete, star of the 1912 Olympics, made his professional baseball debut with Rocky Mount Railroaders, 1909. Ball park was 300 yds. W. . This historical marker was erected in 1959 by North Carolina Office of Archives & History. It is in Rocky Mount in Nash County North Carolina

Indian athlete, star of the 1912 Olympics, made his professional baseball debut with Rocky Mount Railroaders, 1909. Ball park was 300 yds. W. 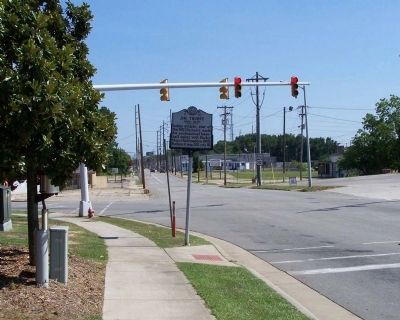 Regarding Jim Thorpe. James (Jim) Francis Thorpe (1888-1953) was an exceptional athlete of the early twentieth century. In 1909 he played professional baseball in North Carolina for the Rocky Mount Railroaders and the Fayetteville Highlanders. He also played professional football and excelled in track and field. After Thorpe won gold medals in the pentathlon and the decathlon at the 1912 Olympics in Stockholm, Sweden’s King Gustav V called him “the greatest athlete in the world.”

Thorpe and his twin brother, Charles, two of eleven children, were born in a cabin on an Indian reservation near Prague, Oklahoma, to Hiram and Charlotte Thorpe. Their mother and father were of mixed American Indian descent. Thorpe’s mother was Potawanomi and French; his father was Irish, and the grandson of the Sauk and Fox warrior, chief Black Hawk. At his birth Jim was named Wa-Tho-Huck, an American Indian term that means “Bright Path.”

Thorpe was educated at Indian boarding schools near his home in Oklahoma. In 1904 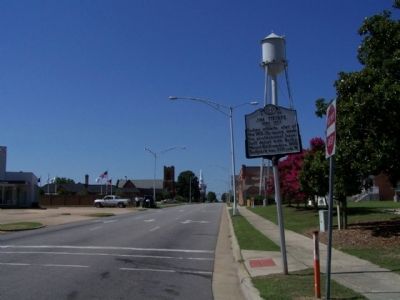 By Mike Stroud, July 18, 2011
3. Jim Thorpe Marker, looking south
he enrolled at the U. S. Indian Industrial School in Carlisle, Pennsylvania. While at Carlisle, Thorpe was coached by Glenn “Pop” Warner, who added him to the track team. Recognizing his talent as an athlete, Warner suggested that Thorpe train for the 1912 Olympic Games.

At those Games, Thorpe took first place in the broad jump, discus throw, 1500 meter run, 200-meter dash, shot put, and high jump. A year later, after word spread that Thorpe had played semipro baseball in North Carolina, he lost his amateur status and he was forced to return his Olympic medals.

In 1982, nearly thirty years after Thorpe’s death, the long awaited efforts of his family and friends to restore his amateur status during the period of the 1912 Olympic Games proved successful. The International Olympic Committee unanimously restored his Olympic medals. A memorial stands in honor of Thorpe in Jim Thorpe, Pennsylvania, the town named for him.(North Carolina Office of Archives & History)

Also see . . .  Encyclopedia of World Biography- Jim Thorpe. ...Following the spring of 1909, when Thorpe starred in track, he left the Carlisle school with two other students to go to North Carolina, where they played baseball at Rocky Mount in the Eastern Carolina Association. Thorpe pitched and played first base... (Submitted on August 8, 2011, by Mike Stroud of Bluffton, South Carolina.) 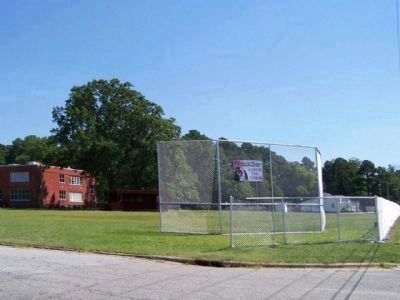 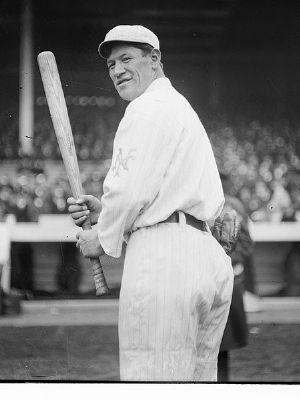