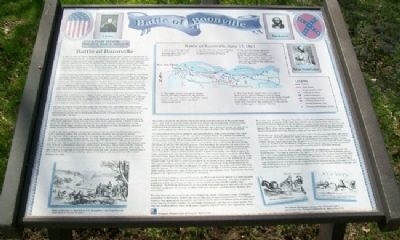 On June 17, 1861, the Battle of Boonville took place at this and other locations along this road. By most standards of warfare, the Battle of Boonville was more truly a skirmish or demonstration than a full blown battle. But small conflicts can sometimes have large consequences, and such was the case with the outcome of the Battle of Boonville. The battle was not only one of the first flash points of conflict in the rapidly escalating Civil War, but it also helped to decide in favor of the Union the then uncertain question of Missouri's ultimate status. Ex-Confederate, Thomas L. Snead, summarized the consequences of the Battle of Boonville in 1888: "Insignificant as was this engagement in a military aspect, it was in fact a stunning blow to the Southern Rights' people of the State, and one which did incalculable and unending injury to the Confederates."

Months of mounting tensions between Unionist and Secessionist factions preceded the outbreak of hostilities at Boonville. A pro-Southern faction, led by Gov. Claiborne Fox Jackson, was at work organizing a military force, the State Guard, to be placed under the command of Maj. Gen. 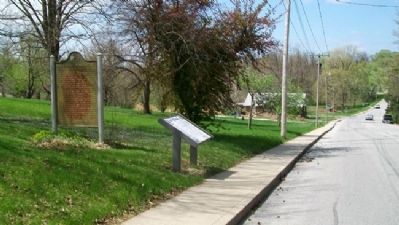 Click or scan to see
this page online
Sterling Price. Backed by a powerful state military force, Gov. Jackson intended to lead Missouri into the Confederacy. Determined to thwart Jackson's designs was a strong Unionist faction based in St. Louis and led by Congressman Frank Blair, Jr. and Gen. Nathaniel Lyon. The final break between these struggling factions came at a meeting, held on June 11, 1861, between Jackson, Price, Blair and Lyon, at the Planter's House in St. Louis. Lyon concluded this stormy meeting by declaring that a state of war now existed between Jackson's treasonous government and the United States.

Jackson and Price, fearing that Lyon's army would soon be on their heels, quickly left this meeting and returned to Jefferson City to organize a hasty evacuation of the Capitol. Reasoning that Jefferson City was too pro-Union to defend, Gov. Jackson and Gen. Price ordered their volunteers to muster at either Boonville or Lexington, both strongholds of Southern sentiment. If Boonville could be held for a couple of weeks while Southern volunteers massed at Lexington, the State Guard might be transformed into an army capable of holding Missouri for the Confederacy.

On June 13, Jackson evacuated the capital city. Two days later, Lyon, Blair and 2,000 soldiers arrived in four boats to take control of Jefferson City. Lyon was well aware of the danger that could come from allowing Price and Jackson

Photographed By Missouri Dept of Natural Resources, undated
3. Diagram of Battle of Boonville on Marker
1. Gen. Lyon's Troops land at 7 a.m. and march west towards Boonville on Rocheport Road.

2. At two miles, the Federal Troops are fired upon by State Guard pickets who then fall back.

3. The Federal troops advance one mile in line of battle and, at 8 a.m., encounter a large body of State Guardsmen ahead. The main part of the battle begins. The State Guard, outnumbered and facing artillery fire, falls back to Camp Bacon.

4. The State Guard retreats to Camp Bacon, but the Steamboat McDowell comes up and begins to shell the camp. Federal troops advance to find camp evacuated.

5. The final State Guard stand is made at their armory at the fairgrounds. Shelling from the McDowell soon forces the State Guard to withdraw and they retreat south. At 11 a.m. Gen. Lyon receives the surrender of Boonville from a delegation of local citizens.
enough breathing space to assemble and train an army. Determined to prevent this by keeping his enemy on the run, Lyon continued steaming on to Boonville with 1,700 men.

Fearing that enemy artillery was emplaced on the bluffs near Boonville, Lyon disembarked his force some eight miles below town. At 7 a.m. Lyon set his army in motion. A march of two miles across the floodplain of the Missouri River led to a point where the road they were on, the Rocheport Road, began a gradual rise into the surrounding river hills. As the force started its ascent, State Guard pickets opened fire, and then fell back.

A mile to the west, an advance detachment of four or five hundred State Guardsmen awaited Lyon's approach. Earlier that morning, the Southern volunteers had moved out of their encampment, called variously Camp Vest or Camp Bacon, to take up their position on Rocheport Road. The commander of the guardsmen, Col. John Sappington Marmaduke, was not optimistic about the outcome of the coming fight. He knew that his total force of 1,500 poorly armed and untrained men was no match for Lyon's disciplined and well-equipped soldiers. Marmaduke urged Gov. Jackson to concentrate his forces further south at Warsaw where battle with the Federals could be had on terms more favorable to the Southerners. With a victory in hand, they might be able to launch a campaign to drive the Federals 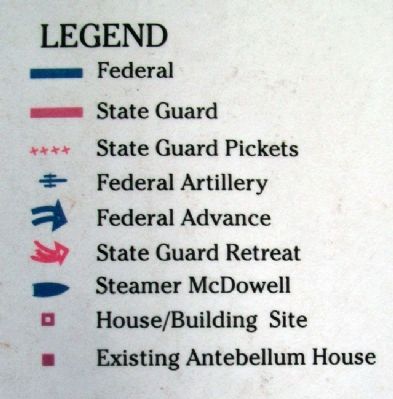 Photographed By Missouri Dept of Natural Resources, undated
4. Battle of Boonville Diagram Key on Marker
from the state. Jackson, however, was unwilling to depart from Boonville without offering a show of resistance, and insisted they make a stand whatever the odds.

The position chosen for the Southern stand was along a lane that intersected Rocheport Road about a mile west of where the pickets first fired on Lyon's approaching army. On the northeast corner of the intersection stood a brick house behind which was a wheat field. Concealing themselves behind the house, its outbuildings and fences, and a thicket of woods, the state forces had a good position from which to pour fire into the exposed ranks of the advancing Federals.

The main portion of the battle opened at approximately 8 a.m. with a brisk shelling of the rebel position by Lyon's artillery, under the command of Captain Totten. The artillery occupied the center of Lyon's column while infantry steadily advanced on either flank. For a while, according to one newspaper account, the air whined with bullets as both sides unleashed volleys at one another. Totten soon found his range, and two cannon balls came crashing into the brick house, and others poured into the Southern position. Thus dislodged, the defenders fell back across the fences and through the wheat field. The Southerners were able to stitch together a new line near the brow of a hill, advance some 20 paces and open fire. Lyon's troops, now rapidly 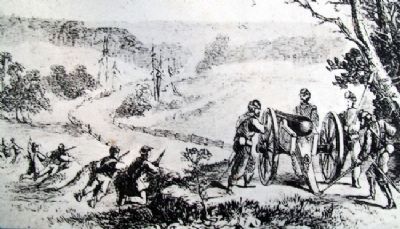 Photographed By O. C. Richardson, 1861
5. Illustration on Battle of Boonville Marker
[Caption reads] Battle of Boonville as sketched by O. C. Richardson, from Camp-Fire and Cotton-Field by Thomas W. Knox
advancing, were compelled to cross a stretch of open ground. A body of the enemy concealed in a grove of trees unleashed what was described as a galling fire. This created the few casualties suffered by the Federal side. Again, Totten's artillery was pressed into service while the troops on both flanks pushed the attack. It seemed at this point that the skirmish might assume the magnitude of a full-fledged battle, but the lack of arms and discipline of the Southern forces began to take their toll. The superior military preparation and fire power of the Federal side soon overpowered the ill-prepared Southerners and Marmaduke gave the order to retreat. The battle had lasted little more than 20 minutes. The withdrawing Southerners made an attempt to maintain some semblance of order as they pulled back, firing at their pursuers from any available cover. Their retreat, however, progressively degenerated into a disorderly stampede.

While the Federal infantry pressed the attack, the McDowell steamed upriver to a point opposite Camp Bacon and began to shell the position with an eight-inch howitzer. This discouraged the Southerners from any attempt to linger in the encampment long enough to gather their belongings. The Federals marched into to [sic] the hastily evacuated camp to find food still on tables and much equipment left behind including 1,200 pairs of shoes, assorted tents, 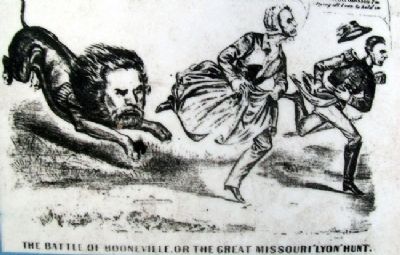 The final Southern stand was made at the fairgrounds, about a mile east of town. During the evacuation of the Capitol, Jackson had moved the state armory to this location. The river-based howitzer was again called into service and lobbed shells onto the Southern position while the Union infantry closed in rapidly. The retreating Southerners were forced to leave behind their only two artillery pieces, a pair of six-pound cannons that were never used against the enemy.

By 11 a.m., Gen. Lyon was riding into Boonville to receive the surrender of the town from a local delegation of citizens. At the same time, Jackson was exiting the other end of town, bound for southwest Missouri to link up with Price and his troops who were at the same time evacuating Lexington. Word of the Boonville rout convinced Price that the rich and friendly Missouri River valley was no longer a safe haven. Lyon's rapid action had denied Price and Jackson the precious time they needed to build up their army in the Missouri heartland.

As battles went, Boonville was clearly a small affair. Three Southerners were killed, and five to nine wounded, while the Federal toll came to five killed, seven wounded. Probably few battles of so minor a scale reaped such large results as did the Boonville triumph for Lyon. He had toppled the state government and sent the governor, 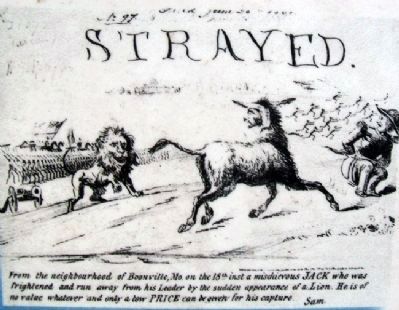 Eminent Civil War historian, Bruce Catton, summarized the significance of what Lyon had accomplished: "This fight at Boonville, the slightest of skirmishes by later standards, was in fact a very consequential victory for the Federal government. Gov. Jackson had been knocked loose from the control of his state, and the chance that Missouri could be carried boldly into the Southern Confederacy had gone glimmering. Jackson's administration was now, in effect, a government-in-exile, fleeing down the roads toward the Arkansas border, a disorganized body that would need a great deal of help from Jefferson Davis's government before it could give any substantial help in return."

Topics and series. This historical marker is listed in these topic lists: Government & Politics • Roads & Vehicles • War, US Civil. In addition, it is included in the Missouri - A State Divided: The Civil War in Missouri series list. A significant historical month for this entry is June 1990.