The Comstock Trail and History Kiosk 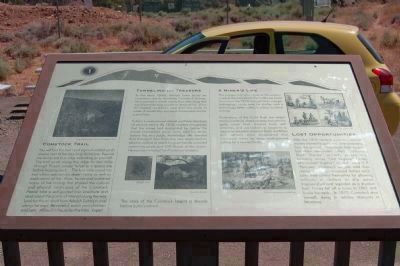 [Panel 1]:
Comstock Trail
You will find the trail head sign a hundred yards ahead, next to the recycling/dump site. Beyond the dump site is a ridge extending to your left. The trail winds along this ridge for two miles through Pinyon Juniper forest to a quarry site before looping back. The four-mile round trip trail offers spectacular desert vistas as well as exploration of the flora, fauna and scattered traces of the mining that shaped the cultural and physical landscapes of the Comstock. Pleas take a self-guided tour brochure and read about the points of interest along the way. Look for the air shaft from Adolph Sutro’s tunnel along the way! Be careful, watch your children and pets. Allow 2 ½ hours for this hike. Enjoy!

Tunneling for Treasure
In the early 1860s, Adolph Sutro found an ingenious way to dominate Comstock mining. He proposed a tunnel nearly four miles long that would provide easy access to deep mines, allow for needed ventilation, and drain the shafts of water. It would also transfer miners and ore for a small fee. 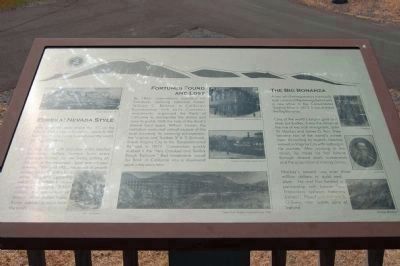 The Story of the Comstock begins a decade before Sutro’s arrival...

A Miner’s Life
The prospectors who came to the eastern slope of the Sierra from the California Gold County in the 1850’s brought their meager belongings, crude tents for shelter, and a technology better suited to place (surface) mining.

Illustrations of the Gold Rush era depict tranquil settings where prospectors pan for gold, crush their mineral finds with arrastras, and use rockers or longtoms to separate valuable minerals from worthless dirt. Miners soon discovered that Comstock riches lay deep underground calling for a new technology.

Lost Opportunities
After the 1859 mineral discovery, several miners shared the gold and silver emerging from the ground. They made high wages, but when newcomers called “California Rock Sharps” arrived, prospectors including James “Old Virginny” Finney, who named Virginia City, and Henry H.P. “Pancake” 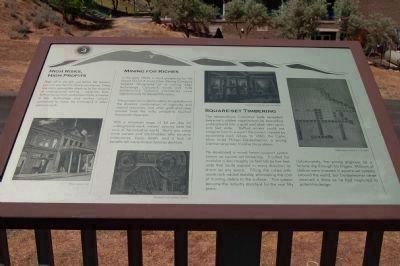 [Panel 2]:
Eureka! Nevada Style
Look up at the “V” on the hillside. This is Mount Davidson, nearly 8,000 feet high. People came from all over the world seeking its treasure.

As news of the gold and silver reached California, fortune hunters from every profession hurried over the Sierra, settling on this side of the mountain. Look around you. Between 1859 and 1880 thousands of people worked on the Comstock – in mines, mills, and supporting industries. Comstock mines yielded roughly $360 million, the equivalent of several billion dollars today. Riches seemed to pour from the earth.

Fortunes Found and Lost
By 1864, corporations exploited the Comstock, replacing individual miners. William C. Ralston, a California businessman with early Comstock investments, organized the Bank of California to monopolize the district and seize the profits. With the help of the Banks shrewd local agent, William Sharon, the institution controlled critical aspects of the local economy. Its crowning achievement, 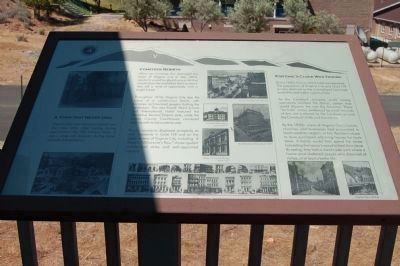 The Big Bonanza
A new set of entrepreneurs eventually took control of the mining district with a new strike in the Consolidated Virginia Mine in 1873. It was dubbed the Big Bonanza.

One of the world’s largest gold and silver bodies, it was the climax of the rise of two Irish immigrants, John W. Mackay and James G. Fair. They became two of the world’s richest men. According to legend, Mackay arrived in Virginia City with nothing in his pockets. After working in the mines, he made his first fortune through shrewd stock investments and the acquisition of mining claims.

[Panel 3]:
High Risks, High Profits
High off to the left, just below the horizon you can see the Comstock cemeteries. There are many more gravesites attesting to the hazards of underground mining – cave-ins, fires, falling equipment and pneumonia, 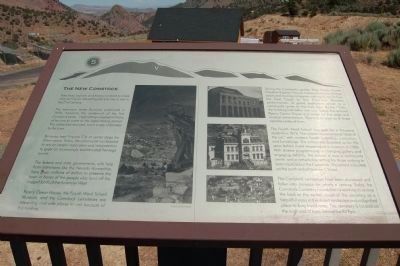 By Barry Swackhamer, July 22, 2011
5. The Comstock Trail and History Kiosk Marker, Panel 5
[Far left picture caption:]
Combination Shaft
[Far right photos are not captioned.
They are of The Piper Opera House, The Fourth Ward School and The Comstock Cemetery.
to name a few. Technology and worker unions combined to make the Comstock a safer place to work.

Mining for Riches
In the early 1860’s, a stock prospectus for the famed Gould & Curry Silver Mining Company boasted lithographs of its cutting edge technology. Comstock mines and mills established industry standards used internationally for the next fifty years.

The prospectus invited investors to capitalize on the dynamic combination of ingenuity and natural resources, and when gold and silver poured from the mills, prosperity touched thousands of people.

With a minimum wage of $4 per day for underground work, miners’ salaries were the envy of the industrial world. But it was some mine owners and stockholders who became millionaires. Injury, death and the lack of benefits left many miners’ families destitute.

Square-set Timbering
The extraordinary Comstock Lode exceeded everyone’s wildest expectations by expanding underground into a gold and silver vein up to sixty feet wide. Baffled miners could not imagine how to support the cavern created by excavating such riches. In 1860, the Ophir Mine hired Philipp Deidesheimer, a young German engineer, to solve the problem. 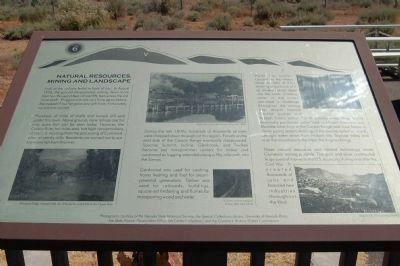 Unfortunately, the young engineer let a fortune slip through his fingers. Millions of dollars were invested in square-set systems around the world, but Deidesheimer never received a dime as he had neglected to patent his design.

[Panel 4]:
A Town That Never Died
Virginia City never became a ghost town like many other cities hosting mining operations in the 19th Century West. It was a close call, however, during some periods of its existence.

Comstock Rebirth
When an immense fire destroyed the heart of Virginia City in late 1875, residents vowed to rebuild on a scale that would show the world that the Comstock was still a land of opportunity with a bright future.

Throughout 1876, Virginia City was the scene of a construction boom with Victorian architectural designs dotting the landscape. The new Fourth Ward School and International Hotel featured the distinctive Second Empire style, while the Storey County Courthouse conveyed stability with its Italianate facade.

Private mansions displayed prosperity as well. Residents in Gold Hill and on the upper streets of Virginia 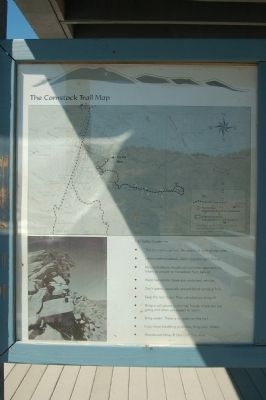 Fortune’s Clock Was Ticking
By the 1880’s the Comstock Lode was depleted. The population of Virginia City and Gold Hill quickly declined as the unemployed lost hope and left to seek better opportunities.

As the Comstock slumped, small mining operations combed the district, certain they would discover the next Big Bonanza. These “rat hole” mines, evidenced by small mounds of dirt, are scattered by the hundreds around the Comstock’s hills and mountains.

By the 1930’s, many of Virginia City’s homes, churches and businesses had succumbed to harsh weather, neglect, or fire. Residents closer to town purchased adjoining houses for back taxes. A family would then spend the winter harvesting the house’s wood to feed their stove. By spring, they had a vacant side yard where a home once sheltered people who dreamed of riches, or at least a better life.

[Panel 5]:
The New Comstock
Television, tourism and history combine to make Virginia City an interesting place to live or visit in the 21st Century.

The television series Bonanza premiered in 1959, honoring the centennial of the first Comstock strike. High ratings inspired millions of tourists to come to the aged 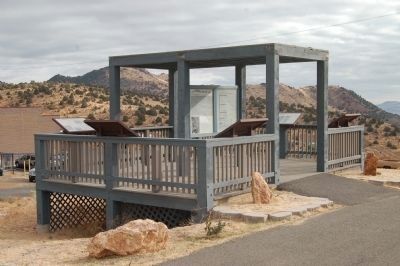 By Barry Swackhamer, October 25, 2011
8. The Comstock Trail and History Kiosk Marker
mining district. The riches had returned, but in a way unfamiliar to the town.

Bonanza kept Virginia City at center stage for fifteen years. Today, the community has learned to rely on careful restoration and interpretation to greet an increasingly sophisticated heritage tourist.

The federal and state governments, with help from institutions like the Nevada Humanities, have given millions of dollars to preserve this town in honor of the people who lived off the rugged lands of the American West.

Piper’s Opera House, the Fourth Ward School Museum, and the Comstock cemeteries are interesting and safe places to visit because of this funding.

During the Comstock’s golden days, Piper’s Opera House in Virginia City was a required stop for famous actors and touring companies making the circuit from the East Coast to San Francisco. Between performances, its grand auditorium served as a community center for the lively town. By the 1930s, the building had fallen into ruin. Today, the restored Piper’s Opera House is a center for fine plays and musical presentations. Piper’s is located on B Street near the center of town.

The Fourth Ward School was built for a thousand students in 1876. The school was considered “state of the art,” with modern health amenities, curriculum, and furnishings. The school was boarded up for fifty 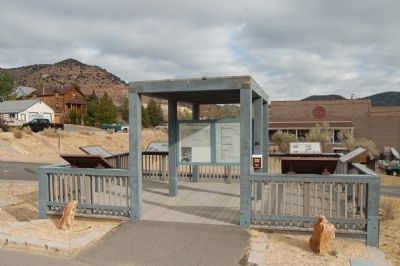 By Barry Swackhamer, October 25, 2011
9. The Comstock Trail and History Kiosk Marker
years before it was reopened as a museum in 1986. With diverse programming, a changing gallery, and engaging exhibits, the school is now a community center and a remarkable setting for those wishing to learn more about the Comstock. The school is located on the south end of town on C Street.

The Comstock cemeteries have been plundered and fallen into disrepair for nearly a century. Today the Comstock Cemetery Foundation is working to restore the land to the earlier vision of the cemetery as a beautiful oasis in the desert landscape and a dignified place to bury loved ones. The cemetery is located on the north end of town behind the RV Park.

[Panel 6]:
Natural Resources, Mining and Landscape
Look at the cyclone fence in front of you. In August 1995, the ground disappeared, sinking down more that two thousand feet, almost fifty feet across the old mine shaft. Plugged with old cars thirty years before, the makeshift barrier gave way with time. Fortunately, no one was injured.

Hundreds of miles of shafts and tunnels still exist under this town. Above ground, mining tailings are the only scars that can be seen today. However, the Carson River, ten miles east, has high concentrations of mercury resulting from the processing of Comstock silver at nearby mills. Residents are warned not to eat too many fish from this river.

During the late 1800s, hundreds of thousands of trees were chopped down throughout this region. Forests on the east side of the Carson Range eventually disappeared. Spooner Summit, Incline, Glenbrook, and Truckee became key transportation centers for timber and cordwood as logging extended along a fifty-mile path into the Sierras.

Cordwood was used for cooking, home heating and fuel for steam-powered generators. Timber was used for railroads, buildings, square-set timbering and flumes for transporting wood and water.

Water was another concern for the miners, either too little of it for drinking or too much of it as miners delved deep into the earth. Scalding water in the mines remained a challenge throughout the mining days despite massive Cornish pumps and Adolph Sutro’s tunnel. For its potable water, Virginia City eventually purchased water held in Hobart Reservoir and Marlette Lake, high in the Carson Range near Lake Tahoe. A clever piping system, working on the reverse siphon principle, brought water down from Hobart into Washoe Valley and over the mountains to the West, the Virginia Range.

These natural resources and related technology made Comstock mining possible. The gold and silver contributed huge sums of money to the U.S. economy during and after the Civil War. It created thousands of jobs and financed new industries throughout the West.

Erected by Students and Staff of the Storey County School District.

More about this marker. The history kiosk is at the trail head for the Comstock Trail. Both the trail and the kiosk are "a project created by the students and staff of Storey County School District." The kiosk houses 6 panels which describe various aspects of the history of the Comstock Lode.