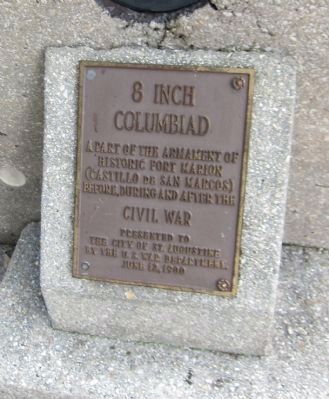 Photographed By Craig Swain, August 1, 2011
1. 8 inch Columbiad Marker
Inscription.
8 inch Columbiad. .
A part of the armament of historic Fort Marion (Castillo de San Marcos) before, during and after the Civil War Presented to the City of St. Augustine by the U.S. War Department June 12, 1900. . This historical marker is in St. Augustine in St. Johns County Florida

A part of the armament of
historic Fort Marion
(Castillo de San Marcos)
before, during and after the
Civil War
Presented to
the City of St. Augustine
by the U.S. War Department
June 12, 1900

Topics. This historical marker is listed in this topic list: War, US Civil. A significant historical month for this entry is June 1857.

Location. 29° 53.555′ N, 81° 18.761′ W. Marker is in St. Augustine, Florida, in St. Johns County. Marker is at the intersection of Cathedral Plaza and St. George Street, on the left when traveling west on Cathedral Plaza. Located in the Plaza de la Constitución. Touch for map. Marker is in this post office area: Saint Augustine FL 32084, United States of America. Touch for directions. 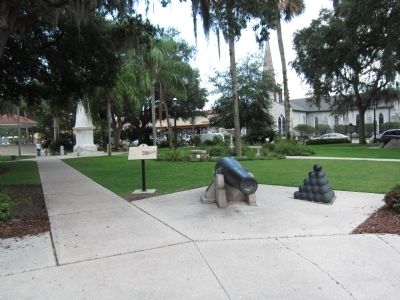 More about this marker. The plaque is likely in error. These guns were not part of Fort Marion's armament before the Civil War (the date of manufacture rules that out). The columbiads were part of a batch produced for the Confederacy early in the Civil War.

According to reports, the fort contained only 8-inch howitzers (which are still at the fort today) and 32-pounder smoothbore guns, when recaptured by Federals in March 1862. The Federals may have captured the columbiads elsewhere and moved them to Fort Marion for safe-keeping.

Clearly the cannons were at Fort Marion after the war. However, their use by the Army after the war would be limited. The elevation system would require pre-Civil War carriages. Further, the guns were not constructed in the manner used by the regulation Federal 8-inch guns, and would be suspect when firing full charges. 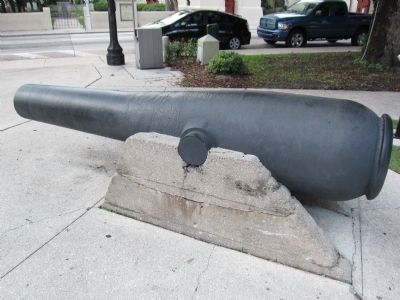 Photographed By Craig Swain, August 1, 2011
3. 8-inch Columbiad
This gun bears the marks of Bellona Foundry (owned by Junius L. Archer who's initials appear on the trunnions). It was produced in 1861, weighed 8750 pounds, and assigned registry number 29. 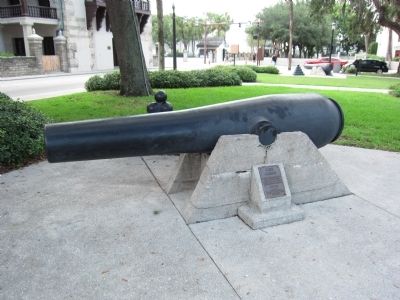 Photographed By Craig Swain, August 1, 2011
4. Second 8-inch Columbiad
Like its mate, this columbiad came from Bellona Foundry in 1861. Marks indicate its registry number as 27 with a weight of 8750 pounds. Also like the other columbiad, this cannon likely was not in St. Augustine before or during the Civil War. 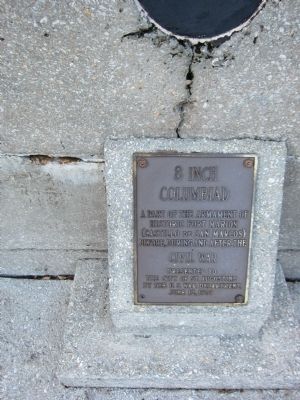 Photographed By Craig Swain, August 1, 2011
5. Plaque on Second Columbiad
The second columbiad is at the corner of St. George and King Streets. 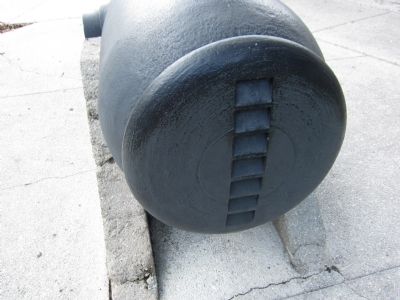