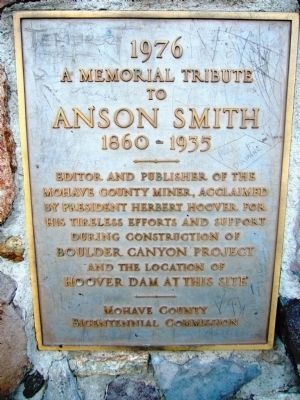 By Bill Kirchner, August 30, 2011
1. Anson Smith Marker
Inscription.
Anson Smith. 1860 – 1935.
A Memorial Tribute to Anson Smith 1860 - 1935. Editor and Publisher of the Mohave County Miner, acclaimed by President Herbert Hoover for his tireless efforts and support during construction of Boulder Canyon Project and the location of Hoover Dam at this site. . This historical marker was erected in 1976 by Mohave County Bicentennial Commission. It is Near Boulder City in Mohave County Arizona

A Memorial Tribute
to
Anson Smith
1860 - 1935
Editor and Publisher of the Mohave County Miner, acclaimed by President Herbert Hoover for his tireless efforts and support during construction of Boulder Canyon Project and the location of Hoover Dam at this site.

Topics and series. This historical marker is listed in these topic lists: Communications • Industry & Commerce • Waterways & Vessels. In addition, it is included in the Former U.S. Presidents: #31 Herbert Hoover series list. A significant historical year for this entry is 1860.

Location. 36° 0.919′ N, 114° 44.067′ W. Marker is near Boulder City, Arizona, in Mohave County. Marker is on Kingman Wash Access Road, on the left when traveling east. Marker is 0.43 miles from the center of Hoover Dam on the Arizona side. Look for the first "free" parking lot on the left side of the road. Touch for map. Marker is in this post office area: Boulder City NV 89005, United States of America. Touch for directions.

Other nearby markers. At least 8 other markers are within walking distance of this marker. Hoover Dam (approx. 0.2 miles away in Nevada); Dr. Elwood Mead 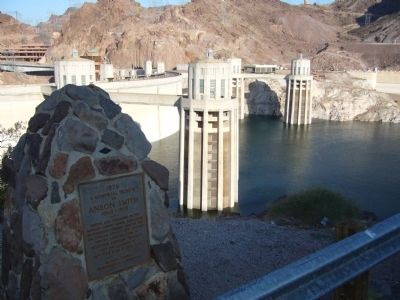 Anson Smith - For some of his friends, Anson H. Smith was the editor with the longest continuous tenure in the whole nation. For still others he was an ideal family man with 10 fine children, all of whom survived him. For all who knew him, he was a man of high ideals, strong convictions, an unfailing locality to his country and state, and a friend to everyone.
He was the founder and editor of the Mohave County Miner, a weekly newspaper launched on November 5, 1882 in one of the 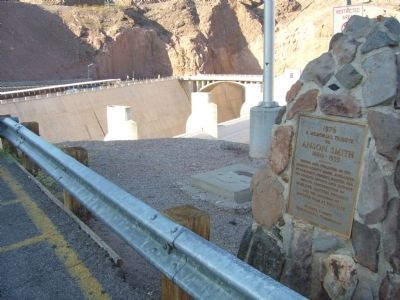 By Bill Kirchner, August 30, 2011
3. Anson Smith Marker
Arizona spillway in background.
pioneer mining districts of Arizona. It began in Mineral Park and moved shortly after the arrival of the railroad to the new community of Kingman, where it became a bulwark of support for all worthwhile endeavors.
Anson Smith is widely recognized as the “father of the Boulder Dam.” As early as 1890, Smith became interested in the potential of the Colorado River as a source of power and of water for irrigation. Year after year, his newspaper advocated the building of a dam in Boulder Canyon.
When he presented his ideas to Franklin K. Lane, Secretary of the Interior under President Woodrow Wilson, Lane wrote a reply in which he called Smith’s ideas “a wonderful dream of a wonderful undertaking” but warned that it was “just 50 years ahead of time.”
Smith later described as one of the biggest moments of his life the occasion on which, in June 1933, with the dam about one-third completed, he stood in the dry bed of the Colorado, its water flowing through diversion tunnels on either side. Secretary of Commerce Herbert Hoover, while presiding at the Santa Fe conference on the Colorado River Compact in 1922, called Anson Smith the “Father of the Boulder Dam.”
He was active in promotion of good roads, and at the time of his death he was endeavoring to obtain prompt completion of the highway from Kingman to Boulder (Hoover) 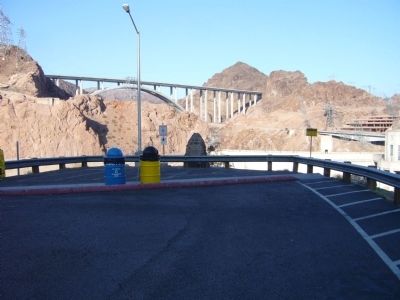 By Bill Kirchner, August 30, 2011
4. Anson Smith Marker
Dam. Today there is a road in Kingman named after him. 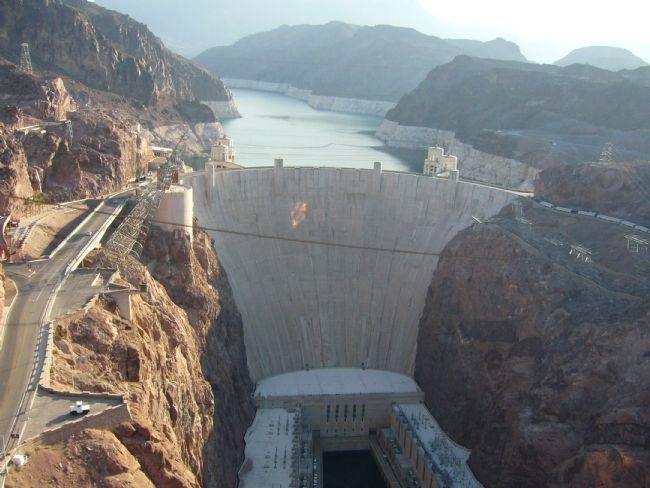