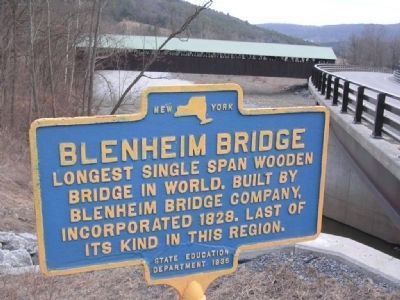 Photographed By Howard C. Ohlhous, April 11, 2007
1. Blenheim Bridge Marker - North Blenheim, NY
The Old Blenheim Bridge, which spans the Schoharie Creek, is in the background. The modern Route 30 bridge curves off to the right of the photo.
Inscription.
Blenheim Bridge. .
Longest single span wooden bridge in world. Built by Blenheim Bridge Company, Incorporated 1828. Last of its kind in this region.. . This historical marker was erected in 1936 by New York State Education Department. It is in North Blenheim in Schoharie County New York

Longest single span wooden
bridge in world. Built by
Blenheim Bridge Company,
Incorporated 1828. Last of
its kind in this region.

Topics and series. This historical marker is listed in these topic lists: Bridges & Viaducts • Notable Buildings • Roads & Vehicles. In addition, it is included in the Covered Bridges series list. A significant historical year for this entry is 1828. 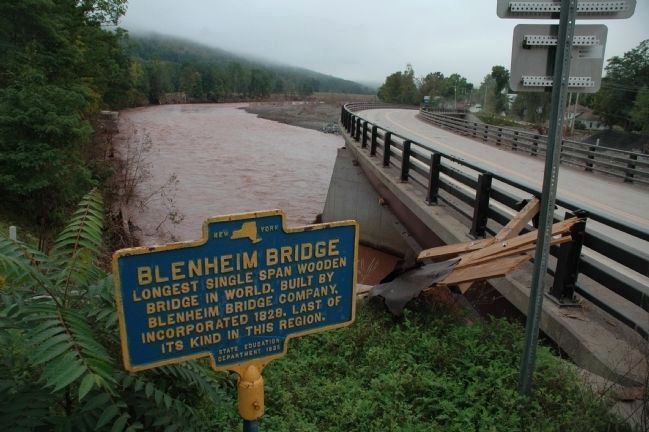 Photographed By Howard C. Ohlhous, September 10, 2011
2. Blenheim Bridge Marker - Minus the Blenheim Bridge
The bridge was washed away and destroyed during record breaking flooding of the raging Schoharie Creek after Hurricane Irene on August 28, 2011. A few pieces of the wooden bridge remain wedged in the railings of the Route 30 bridge, just to the right of the marker.

Regarding Blenheim Bridge. The Old Blenheim Bridge was located in the Town of Blenheim on State Route 30 in North Blenheim, Schoharie County, New York. It spanned the Schoharie Creek and was "double-barreled" or had two separate lanes. At 232 feet in length between the stone abutments, this bridge had the unique distinction of being "the longest covered single span wooden bridge in the world" and was one of only six remaining bridges in the world with two separated lanes. It was constructed of Long truss with a center arch. The bridge was built in 1854-5 by Nicholas M. Powers under contract for the Blenheim Bridge Company (inc. 1828) as a toll bridge and retired from use in 1931, and it was named a National Historic Engineering Landmark, as well as a National Historic Landmark, 1935.

It's interesting to note that the bridge was not built in place over the Schoharie Creek as most folks would imagine, but 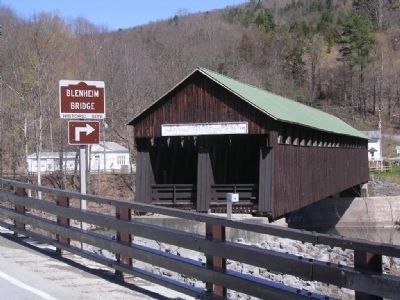 Photographed By Howard C. Ohlhous, April 20, 2005
3. Blenheim Bridge
The west portal of the old Blenheim Covered Bridge as seen from the newest bridge over the Schoharie Creek.
rather was assembled at a site nearby, to insure the pieces all fit together correctly. Afterwards it was disassembled and erected in its former location across the creek.
Local lore has it that while the stone abutments were being built one of the masons was sent to fetch a jug of whiskey. Before they got a chance to open the jug and imbibe, the president of the bridge company, J. Dickinson, who was a "teetotaller" (it's an archaic term by today’s standard, a tetotallar being someone who practices and promotes the complete abstinence from alcoholic beverages) arrived unannounced to inspect the progress of the bridge. The masons were forced to hastily hide the jug in the first available spot which happened to be a niche in the abutment. As work proceeded at a quicker pace under the eagle eye of the company president, who wouldn't leave, the masons were forced to build up the stonework around the jug before it was rescued, and supposedly it remains there to this day.

The picturesque old bridge has had many adventures. It has been afire three times and is now insured like any ordinary house. Twice the roof caught fire from windblown sparks and embers from burning buildings in the village. And once, many years ago, when traveling tinkers went about mending pots and pans, carrying a small charcoal stove to heat their soldering irons, one of these tinkers went so sleep 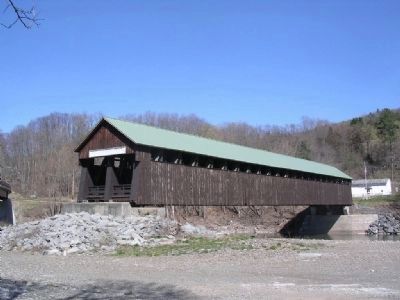 Photographed By Howard C. Ohlhous, circa April 20, 2005
4. The Old Blenheim Covered Bridge
in the bridge and tipped his stove over. The hot coals ignited the wooden bridge but someone happened along in time to put the fire out and to sober up the "tinker" in the nearby river. – Schenectady Union-Star: Feb. 26, 1930

In late August of 2011, record flooding associated with the remnants of Hurricanes Irene and Lee hit the Schoharie River Valley. Classified as a 500-year flood, the valley sustained unprecedented devastation. One of the casualties was the Old Blenheim Bridge, which was swept away and destroyed on August 28. None of the bridge remains at its former site, and pieces of it were scattered far and wide downriver.

Although the community has recovered some of the original bridge timbers from downstream, the property no longer retains its historic integrity. The Old Blenheim Bridge has ceased to meet the criteria for designation because the qualities which originally led it to be designated have been destroyed. The Landmark designation was withdrawn on July 21, 2015, and the property was also removed from the National Register of Historic Places.

Related marker. Click here for another marker that is related to this marker. There are other Markers about this Bridge at the former site of the bridge portal. 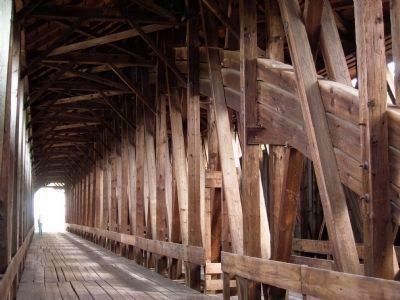 Photographed By Howard C. Ohlhous, September 27, 2008
5. Blenheim Bridge Interior Structure
The wooden Burr Arch, curving up amongst the interior woodwork in the center of the bridge, is responsible for carrying a major portion of the bridge load. The trusses are of Long Truss design. The center truss is higher than the two outside ones. The center truss encloses a single arch of oak which reaches from below the lower chord on up to the ridgepole at the peak of the roof. It is really three concentric arches, one on top of another, and carefully blocked together to allow air to circulate among them.
Almanack website entry (Submitted on July 13, 2022, by Larry Gertner of New York, New York.) 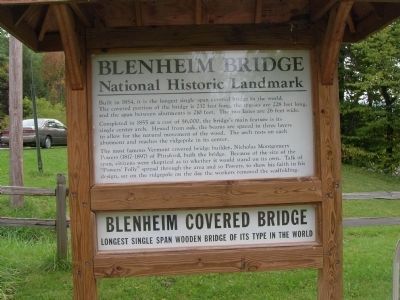 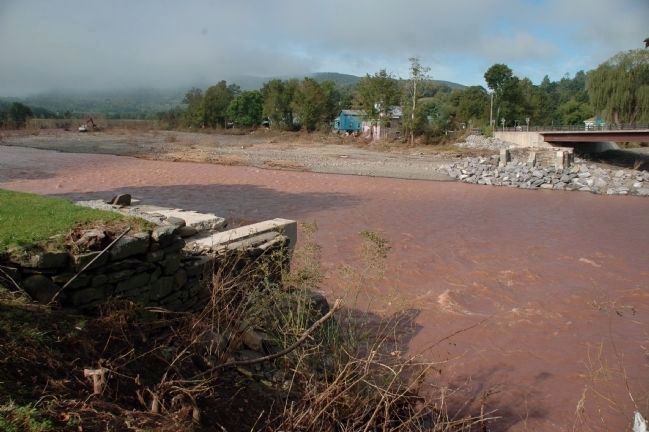 Photographed By Howard C. Ohlhous, September 10, 2011
8. Blenheim Bridge Abutments
The bridge abutments are all that remain in place after the flooding. 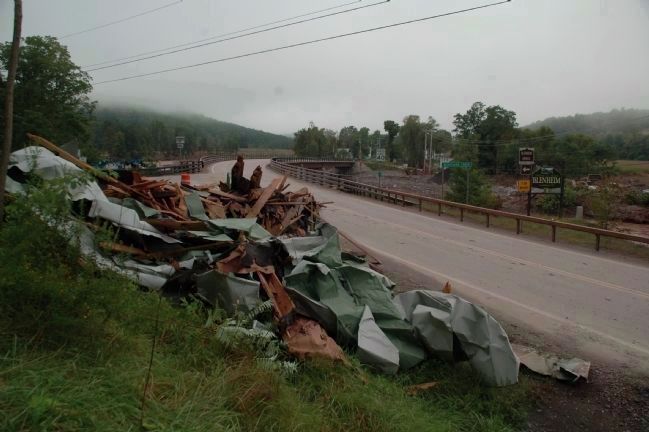 Photographed By Howard C. Ohlhous, September 10, 2011
9. Blenheim Bridge Debris
This pile of debris at the side of the road is all that remains here of the bridge. Pieces of the bridge and its green sheet metal roofing can be seen strewn, a little here, a little there, along the banks of the creek for quite a ways down stream. The marker remains standing, just beyond, at the end of the Route 30 bridge over the creek. 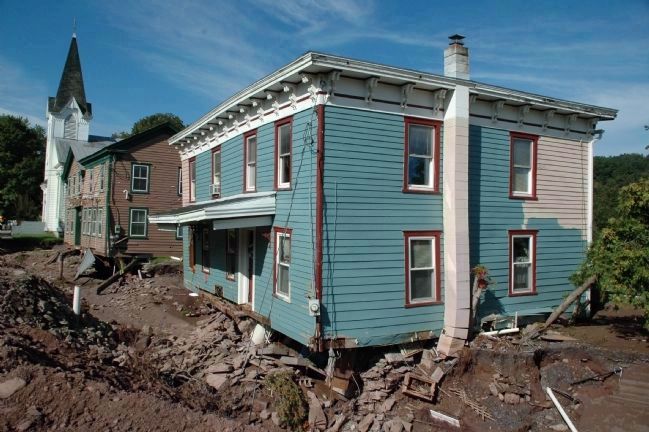 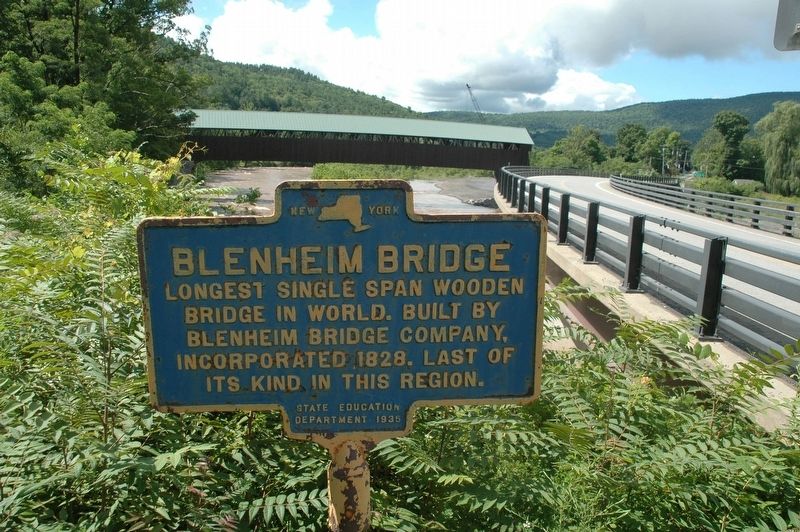 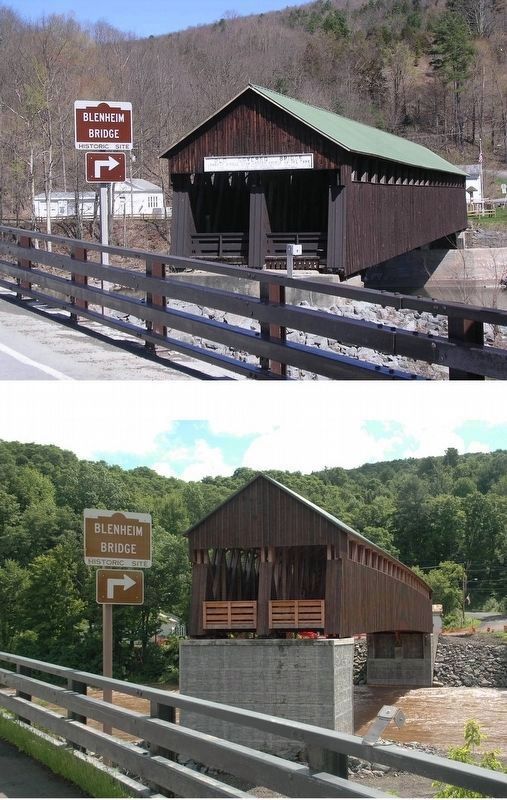