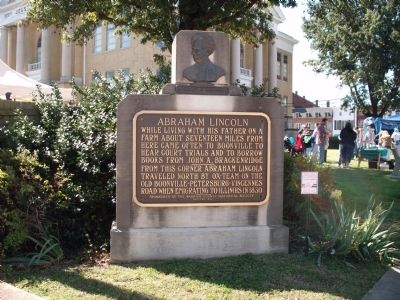 While living with his father on a farm about seventeen miles from here, came often to Boonville to hear court trials and to borrow books from John A. Brackenridge.

From this corner Abraham Lincoln traveled North by ox-team on the Old Boonville - Petersburg - Vincennes Road when emigrating to Illinois in 1830.

Topics and series. This historical marker is listed in these topic lists: Agriculture • Animals • Roads & Vehicles. In addition, it is included in the Former U.S. Presidents: #16 Abraham Lincoln series list.

Other nearby markers. At least 6 other markers are within 11 miles of this marker, measured as the crow flies. 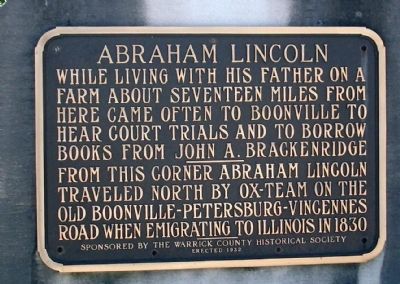 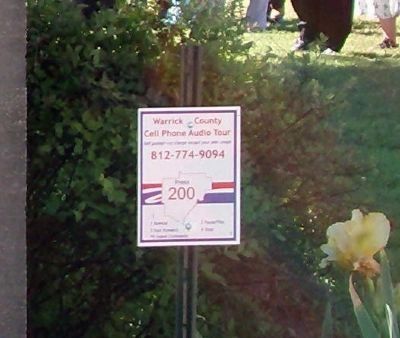 By Courtesy:: Marilyn S. Wolf, October 1, 2011
3. Telephone Audio Tour - - - Interesting
In checking this tour (#200) I found it to be centered on the Courthouse itself (nothing about Lincoln). But it is a good tour of the Courthouse ! ! 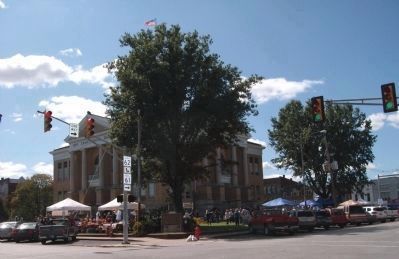 By Courtesy:: Marilyn S. Wolf, October 1, 2011
4. Warrick County Courthouse -and- the Abraham Lincoln Marker
(Click on the photo.) The marker can be seen under the center tree shown in this photo.
[Indeed the community activity for Warrick County at Boonville called "Square Flare" was enjoyable. The Barbecue Cook Off was good! So good, that I wore some home.]
Credits. This page was last revised on November 19, 2019. It was originally submitted on October 4, 2011, by Al Wolf of Veedersburg, Indiana. This page has been viewed 578 times since then and 75 times this year. Photos:   1, 2, 3, 4. submitted on October 4, 2011, by Al Wolf of Veedersburg, Indiana. • Bill Pfingsten was the editor who published this page.
Share This Page.