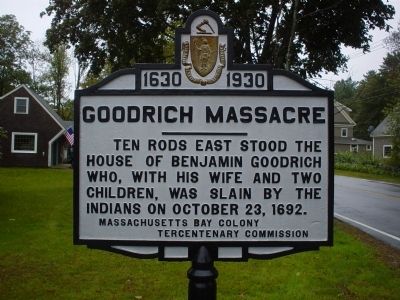 Photographed By Michael Tiernan, October 4, 2011
1. Goodrich Massacre Marker
Inscription.
Goodrich Massacre. , Ten rods east stood the house of Benjamin Goodrich who, with his wife and two children, was slain by the Indians on October 23, 1692 . This historical marker was erected in 1930 by Massachusetts Bay Colony-Tercentenary Commission. It is in Georgetown in Essex County Massachusetts

Ten rods east stood the house of Benjamin Goodrich who, with his wife and two children, was slain by the Indians on October 23, 1692

Topics and series. This historical marker is listed in these topic lists: Colonial Era • Native Americans • Settlements & Settlers. In addition, it is included in the Massachusetts Bay Colony—Tercentenary Commission Markers series list. A significant historical month for this entry is October 1862.

Location. 42° 44.588′ N, 70° 57.55′ W. Marker is in Georgetown, Massachusetts, in Essex County. Marker is on North Street, 0.2 miles north of Meadowview Road when traveling north. This marker is on private property but clearly visible from the driveway. Touch for map. Marker is in this post office area: Georgetown MA 01833, United States of America. Touch for directions. 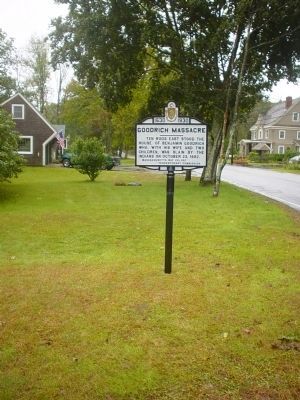 Regarding Goodrich Massacre. For those not carrying their handy-dandy unit conversion slide rule, the distance "Ten rods" is approximately 165.0 feet.

Additional commentary.
1. Massachusetts Bay Colony-Tercentenary Commission marker condition.
This marker is unique amongst the others in the series in that it has been recently removed and refurbished by a local historical society.
— Submitted October 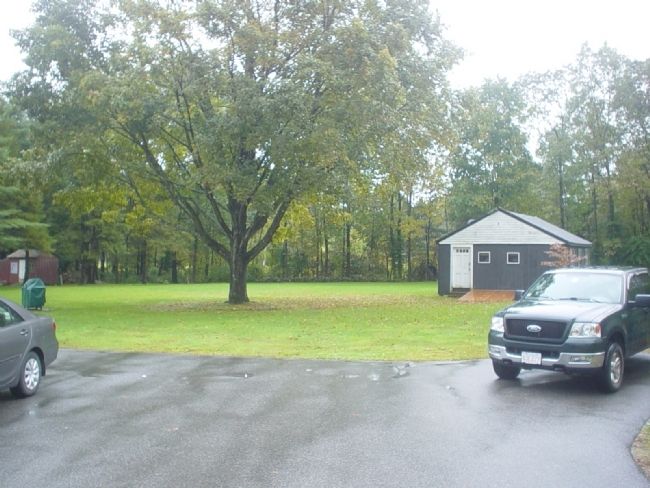