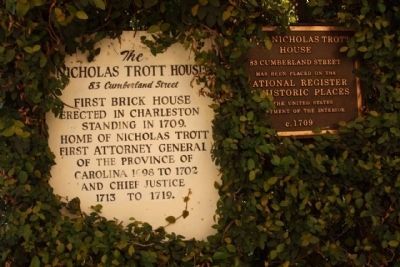 First brick house erected in Charleston standing in 1709. Home of Nicholas Trott first Attorney General of the Province of Carolina 1698 to 1702 and Chief Justice 1713 to 1719.

Regarding The Nicholas Trott House. 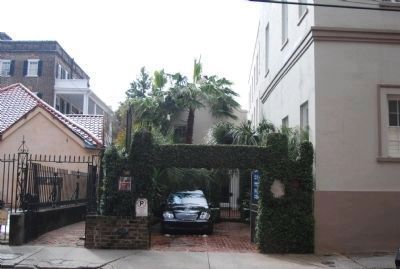 By Michael Sean Nix
2. Trott's House Marker at right of driveway
* See nearby markers
Click for more information.
Trott's Cottage located in the Historic District, is one of the few properties belonging to the pre-revolutionary era. The gardens of the cottage provide ample place for private parties and receptions. This grand property gives us a delightful peek into the rich heritage of the South.

Additional comments.
1. 83 and 85 Cumberland Street
Charleston County Public Library :
-- For some time there has been a dispute about the location of Judge Nicholas Trott's house. Dr. J.L.E.W. Shecut,in his essay on the topography of Charleston, published in 1819, stated :Among the first brick houses built in the town, is that in Cumberland Street, now occupied by Mr. Thorne,immediately opposite to the Episcopal Methodist Church. lt was the residence of Chief Justice Trott. Next to this is the old brick Magazine which has been lately repaired;...
Historian Edward McCrady, in the first volume of his History of South Carolina , cites Shecut and adds:
The house and magazine still stand. The house unfortunately lost a story in the great fire of December, 1861. . . .it was gutted, and 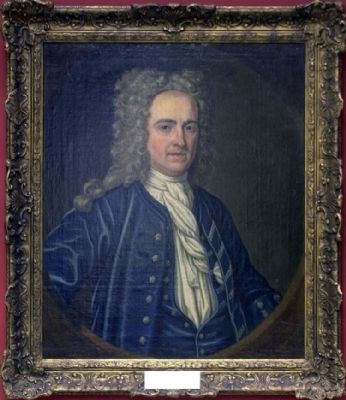 3. Judge Nicholas Trott
when rebuilt upon the old still substantial walls, the third story was left off . It is now the residence of Miss Whitney. lt is to be observed, however, as discrediting the antiquity of this house, that it does not appear on a map published by Parliament in 1739, but on the contrary its site is left as vacant on the map.An examination of the records indicates that both Shecut and Mccrady were talking about the building at 85 Cumberland, of which only the first level is left of the 18th century building. The second story had been removed by 1912. By 1917, two new stories were added to the building, which was converted to the factory of the General Asbestos and Rubber Company. Later the building was used as an office building and by 1945 was in apartments. The thickness of the original brick is indicated by the recess of the present upper story walls at the point of juncture with the old walls. Trott's residence here is still unproven. As noted by McCrady, the "lchnography" of
1739 shows only the Powder Magazine. lt does not show present-day 83 and 85 Cumberland, nor does it show
Cumberland Street. The map was published in June 1739, seven months before Trott's death. The house at 85
Cumberland does appear on the "lchnography" of 1788; the building at 83 Cumberland does not. Kitchens,
stables and other out buildings are omitted from both the 1739 and the 1788 maps. The conclusion is that 83
Cumberland was probably an outbuilding to 85 Cumberland; the central chimney indicates it was probably a kitchen. The conclusion is that both are 18th century structures, but it seems unlikely that Trott lived in either. Another tradition states that, after his marriage to Col. William Rhett's widow, Sarah, in 1728, Judge Trott lived in the house at Rhettsbury (now 54 Hasell ).
(Shecut, Essays , 6-7. ; McCrady, 1:703-704.; Edgar & Bailey, 681-684. ; Heyward, Nicholas Trott , 66. ;
"Ichonography", 1739; "Ichonography", 1788.)
— Submitted October 6, 2011, by Mike Stroud of Bluffton, South Carolina.
Credits. This page was last revised on December 12, 2019. It was originally submitted on October 6, 2011, by Mike Stroud of Bluffton, South Carolina. This page has been viewed 1,144 times since then and 62 times this year. Photos:   1. submitted on October 6, 2011, by Mike Stroud of Bluffton, South Carolina.   2, 3. submitted on February 15, 2010, by Michael Sean Nix of Spartanburg, South Carolina.
Share This Page.