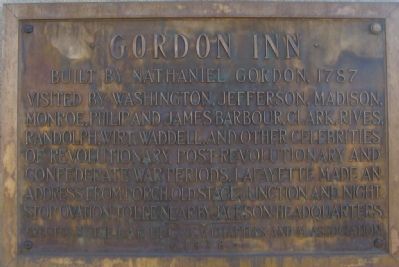 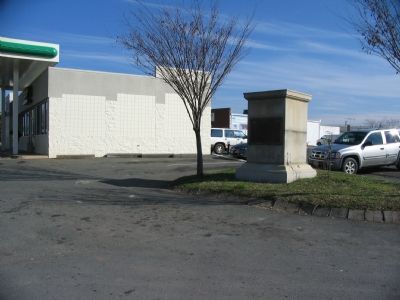 Click or scan to see
this page online
8.553′ N, 78° 11.346′ W. Marker is in Gordonsville, Virginia, in Orange County. Marker is at the intersection of North Main Street (U.S. 15/33) and East Gordon Avenue (U.S. 15), on the right when traveling north on North Main Street. Located to the side of the gas station, on the east side of the traffic circle. Touch for map. Marker is in this post office area: Gordonsville VA 22942, United States of America. Touch for directions.

Other nearby markers. At least 8 other markers are within 2 miles of this marker, measured as the crow flies. Church of the Blind Preacher (approx. 0.6 miles away); The Maplewood Memorial Association (approx. 0.6 miles away); Gordonsville's Legendary Chicken Vendors (approx. 0.7 miles away); Welcome to The Exchange Hotel and Civil War Medical Museum (approx. 0.7 miles away); In Memory of the Soldiers, Both Confederate and Union (approx. ¾ mile away); Orange County / Louisa County (approx. one mile away); a different marker also named Orange County / Louisa County (approx. 1.2 miles away); Madison-Barbour Rural Historic District (approx. 1.8 miles away). Touch for a list and map of all markers in Gordonsville.
Credits. This page was last revised on December 26, 2019. It was originally submitted on January 17, 2008, by Craig Swain of Leesburg, Virginia. This page has been viewed 1,818 times since then and 93 times this year. Photos:   1, 2. submitted on January 17, 2008, by Craig Swain of Leesburg, Virginia.
Share this page.