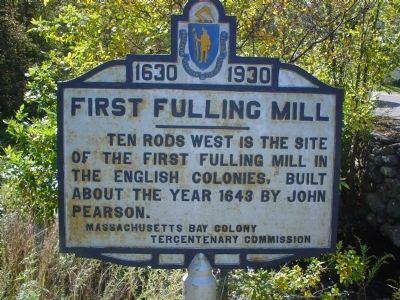 By Michael Tiernan, October 6, 2011
1. First Fulling Mill Marker
Inscription.
First Fulling Mill. Ten rods west is the site of the first fulling mill in the English colonies, built about the year 1643 by John Pearson. . This historical marker was erected in 1930 by Massachusetts Bay Colony-Tercentenary Commission. It is in Rowley in Essex County Massachusetts

Ten rods west is the site of the first fulling mill in the English colonies, built about the year 1643 by John Pearson.

Topics and series. This historical marker is listed in these topic lists: Colonial Era • Industry & Commerce • Settlements & Settlers. In addition, it is included in the Massachusetts Bay Colony—Tercentenary Commission Markers series list. A significant historical year for this entry is 1643.

Location. 42° 44.386′ N, 70° 53.926′ W. Marker is in Rowley, Massachusetts, in Essex County. Marker is at the intersection of Newbury Turnpike (Massachusetts Route 1) and Mill Street, on the right when traveling south on Newbury Turnpike. The marker is lower than most and off the side of the road behind a guard rail. The actual approach to the sign and the mill is from Mill Street just beyond it. Touch for map. Marker is in this post office area: Rowley MA 01969, United States of America. Touch for directions. 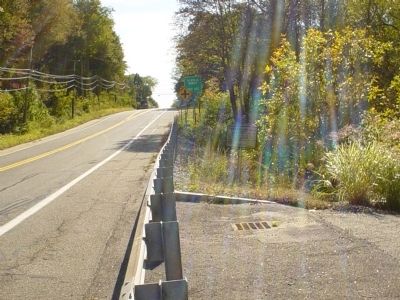 By Michael Tiernan, October 6, 2011
2. Approaching the First Fulling Mill Marker
Here the marker can be seen on the side of the road. For those not familiar with the area, this is a highway speed road that is two lanes wide. Stopping on the side of the road is highly dangerous and discouraged. Beyond this guardrail, approximatly 120 feet (~40meters) is Glen Street.

Regarding First Fulling Mill. For those not carrying their handy-dandy unit conversion slide rule, the distance "Ten rods" is approximately 165.0 feet (50meters)

A quick check of Wikipedia tells us that "Fulling" is:
Fulling or tucking or walking ("waulking" in Scotland) is a step in woolen clothmaking which involves the cleansing of cloth (particularly wool) to eliminate oils, dirt, and other impurities, and making it thicker. 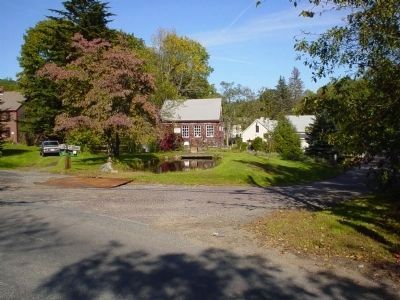 By Michael Tiernan, October 6, 2011
3. Approaching the Rowley Historical Mill from Glen Street
Rowley maintains this mill located slightly west of the marker itself. I do not have any information verifying that this mill is the one that is the subject of the marker itself or a more recent construction. (Noting that a more recent construction can still be 300+ years old.)
. Original 1930 publication by the Commonwealth of Massachusetts of Tercentenary Commission Markers, commemorating the three hundredth anniversary of the Massachusetts Bay Colony. (Submitted on October 14, 2011, by Russell Chaffee Bixby of Bernardston, Massachusetts.) 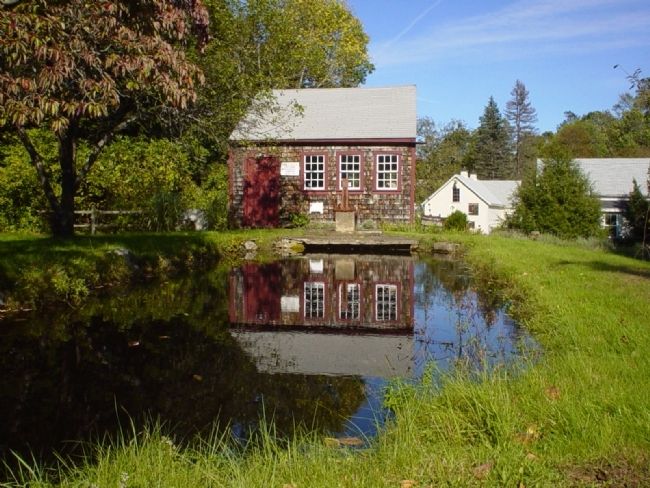 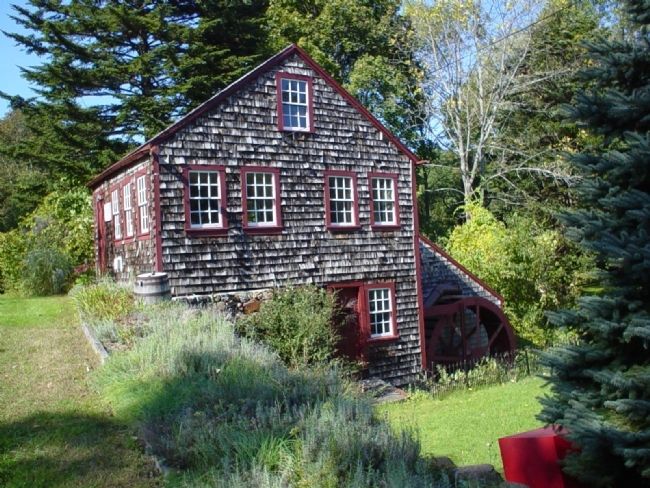 By Michael Tiernan, October 6, 2011
5. Rowley Historical Mill
Side view of the mill. 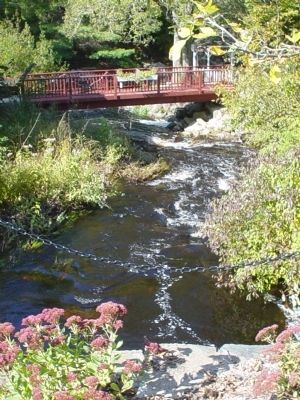