The Civil War in St. Joseph 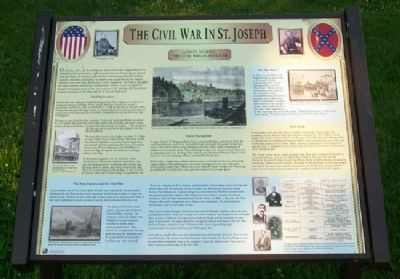 On April 3, 1860, the Pony Express started from this neighborhood on its historic run to the West. Eight months after the Pony Express joined East and West, the country split North to South when South Carolina seceded. Missouri, including St. Joseph, was as divided as the nation. Almost 2,000 men from Buchanan County fought for the Union. Roughly the same number joined the Confederates. Union troops occupied St. Joseph throughout most of the war to protect the strategically important western terminus of the Hannibal & St. Joseph Railroad.

The Flag Incident
Early in the war, both pro-Southern and pro-Northern supporters in the town displayed banners and flags. When John L. Bittinger became St. Joseph's postmaster on May 22, 1861, he raised the U.S. flag on the roof of the post office. During the raising of the flag, former St. Joseph mayor M. Jeff Thompson led an unruly mob that displayed their Southern sympathies by tearing down the flag and flagpole.

Thompson later described the incident, "I drew my Knife and Pistol, ascended the very ladder that they had used to the roof of the building, and amid cheers, groans, 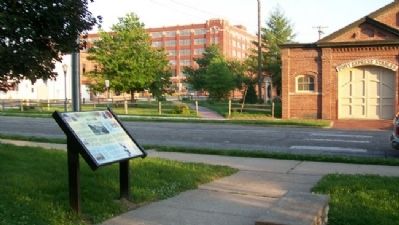 By William Fischer, Jr., May 29, 2011
2. The Civil War in St. Joseph Marker
Pony Express Museum in background right
shouts and threats, I severed the halyard with my bowie..." The mob tore the flag into pieces and threw the flagpole into the Missouri River.

The men then turned their sights on other U.S. flags in town. When they went to Turner Hall they found that Robert Bradshaw and other Union supporters had locked and were guarding the doors. A member of the mob, Alonzo Slayback, asked Bradshaw to lower the flag. He agreed but insisted on firing a salute to the flag.

As Bradshaw appeared on the roof, the crowd threatened to shoot him. Slayback pulled his own gun and defended him. Bradshaw cheered the flag, fired six shots in salute, and safely lowered the flag. The City Council banned flying flags of any kind in St. Joseph until after Union troops occupied the city.

Union Occupation
In June, both U.S. Dragoons from Fort Leavenworth, Kan., and troops from the 2nd Iowa Infantry under Col. Samuel R. Curtis occupied St. Joseph. In late July, most of the Union troops were reassigned, leaving only a small contingent of soldiers to occupy the town. The remaining troops were sent to central Missouri in August to stop Gen. Sterling Price and the pro-Southern Missouri State Guard. Only two Union recruiting officers remained in St. Joseph. 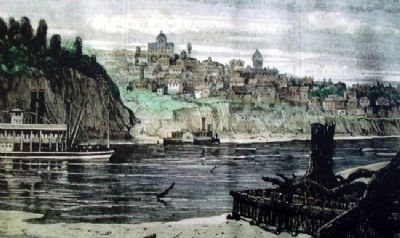 By Unknown, 1861
3. Illustration on The Civil War in St. Joseph Marker
[Caption reads] This illustration shows a view of St. Joseph in 1861 from across the Missouri River. Courtesy St. Joseph Museums, Inc.
weeks looting the stores and raiding the surrounding countryside. When word came that the Union troops were returning, the militia left. Confederates never gained control of St. Joseph again.

Fort Smith
In September 1861, the 16th Illinois Infantry entered St. Joseph under the command of Col. Robert Smith and declared martial law. The soldiers set up camp north of the business district on Prospect Hill. They built an oblong circle of earthworks overlooking the Missouri River to the west and the city to the east. The troops named it Fort Smith. Many Southern sympathizers who refused to sign the oath of allegiance to the Union were forced to work on the construction of the fortifications.

The Union troops set up camps around town. They also established barracks in existing buildings, such as the Odd Fellows Hall at 5th and Felix and the Christian Brothers College at 13th and Henry. Many of the buildings occupied by the troops suffered severe damage. Although St. Joseph began recovering toward the end of the war, it was not the prosperous city it had been. It took almost 20 years for St. Joseph to be recognized as a leading commercial center again.

The "Paw Paws"
In 1863, a local militia unit helped bring law and order to St. Joseph and the surrounding area. Locals nicknamed the unit the "Paw Paws." There are two stories about the 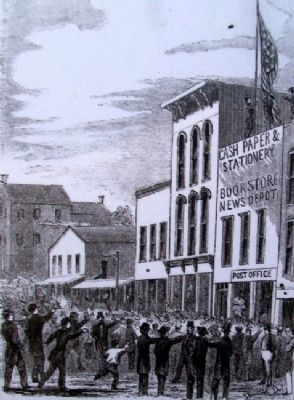 By Unknown, 1861
4. Illustration on The Civil War in St. Joseph Marker
[Caption reads] On May 22, 1861, a mob removed the U.S. flag from the Post Office. Courtesy St. Joseph Museums, Inc.
origin of the nickname. Some claimed that they hid in the pawpaw trees rather than fight Confederates. Another story involves a St. Joseph citizen who commented on the men's dirty appearance as they marched into town. He asked, "Whatcha been doin'?" One of the men replied, "Whatcha think we been doin'? Pickin' Paw Paws?"

The Pony Express and the Civil War
As the western part of the United States became more populated, communication between East and West became more important. It took three months or longer for mail to reach California by boat. Although overland mail routes shortened the time, it still took Californians at least a month to receive letters and news from the East.

The threat of Civil War made quick communication between East and West essential. The company of Russell, Majors and Waddell won a government contract for a new, faster overland mail service. They selected St. Joseph as the starting point because the Hannibal and St. Joseph Railroad ran farther west than any other railroad.

Their new company, the Pony Express, relied on relays of men riding horses carrying mail. Riders often went for stretches of 75 to 100 miles and did not stop except to change horses. They followed an extremely dangerous 2000-mile trail. The Pony Express hired young men, preferably orphans, who weighed no more than 110 pounds. Speed and endurance 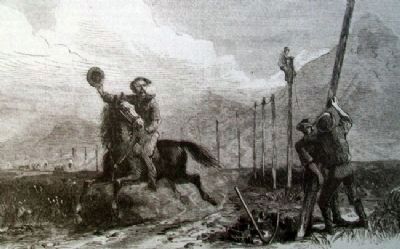 By George M. Ottinger, circa 1861
5. Illustration on The Civil War in St. Joseph Marker
[Caption reads] This Harper's Weekly drawing shows a Pony Express rider greeting workers who are installing telegraph lines.
were the most important traits for the horses. On April 3, 1860, the first Pony Express rider left St. Joseph with much fanfare and celebration. The mail arrived in Sacramento, Calif., in just under 10 days.

Pony Express riders brought Californians the news of Abraham Lincoln's win in the 1860 presidential election. They also brought news of the firing on Fort Sumter in a record eight days, 14 hours. California was important to both the North and the South for its gold, many fortifications, and large population. During the critical early days of the Civil War, the Pony Express helped to keep California in the Union by providing rapid communication between California and Washington, D.C. 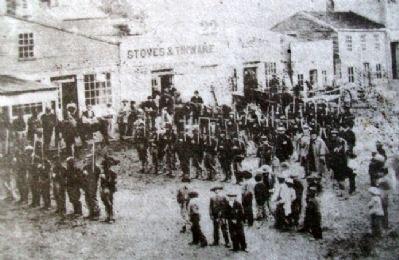 By Unknown, 1860s
6. Photo on The Civil War in St. Joseph Marker
[Caption reads] The "Paw Paws" drilled in the streets of St. Joseph using brooms instead of rifles. Courtesy St. Joseph Museums, Inc.
Infantry • Present at the surrender at Appomattox Courthouse

Patrick McEneany • Union • Chief of Mounted Orderlies at Headquarters of Army of the Potomac; Chief Scout for Gen. Grant

The table above represents just a few of the Pony Express riders who served during the Civil War. Photos from top to bottom are of Charles Cliff, Johnny Fry, David Jay, Patrick McEneany and Michael Whalen. Courtesy St. Joseph Museums, Inc.