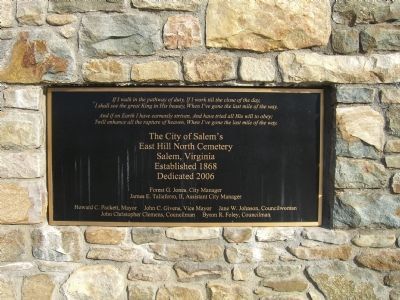 Photographed By Kevin W., November 24, 2007
1. East Hill Cemetery North Marker (Center of three markers)
Inscription.
East Hill Cemetery North. . (Center marker of three) , If I walk in the pathway of duty, If I work till the close of the day, I shall see the great King in His beauty, When I've gone the last mile of the way., And if on Earth I have earnestly striven, and have tried all His will to obey; Twill enhance all the rapture of heaven, When I've gone the last mile of the way.
, The City of Salem's , East Hill North Cemetery , Established 1868 , Dedicated 2006. , Forest G. Jones, City Manager . James E. Taliaferro, II, Acting City Manager . Howard C. Packet, Mayor . John C. Givens, Vice Mayor . Jane W. Johnson, Councilwoman . John Christopher Clemens, Councilman . Byron R. Foley, Councilman, (Two markers border the center marker. They contain a list of about 150 names of Salem area citizens buried in East Hill Cemetery North. Additionally, there are numerous unknowns buried here.) . This historical marker was erected in 2006 by The City of Salem, The Citizens League of Salem. It is in Salem Virginia

(Center marker of three)
If I walk in the pathway of duty, If I work till the close of the day, I shall see the great King in His beauty, When I've gone the last mile of the way.

(Two markers border the center marker. They contain a list of about 150 names of Salem area citizens buried in East Hill Cemetery North. Additionally, there are numerous unknowns buried here.)

Erected 2006 by The City of Salem, The Citizens League of Salem.

Topics. This historical marker is listed in these topic lists: African Americans 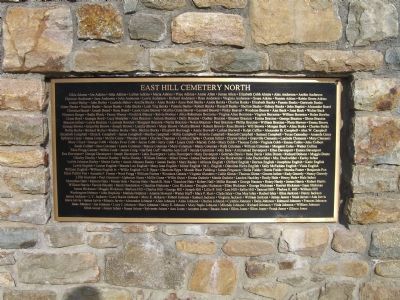 Click or scan to see
this page online
• Cemeteries & Burial Sites. A significant historical year for this entry is 1868.

Regarding East Hill Cemetery North. In 1868, this plot was purchased by Bernard Pitzer from the estate of Nathaniel Burwell to establish an African American burial ground. It soon became the most prominent black cemetery in town. It is still active but seldom used today. The city maintains it, but many gravestones are toppled or displaced. More than a hundred others are unmarked entirely. Among prominent citizens buried here are the Reverend B. F. Fox, pastor of First Baptist 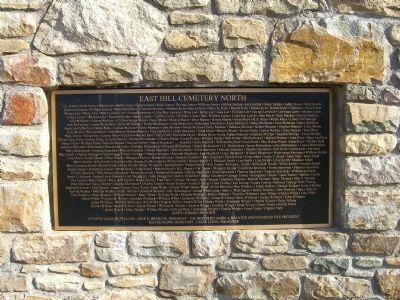 Students may find the idea of engaging in research over the summer to be somewhat daunting, yet 13 students were chosen to tackle significant research of their own interest in the prestigious Summer Scholar program offered through/at Roanoke College.

The Summer Scholar program is a grant that enables qualified students to conduct intensive, independent research for eight to twelve weeks during the summer. To qualify, a student must have a GPA of 3.0 or higher and must have completed eight units of credit by the start of the grant period.

Each summer scholar works with a faculty mentor who guides the project. Over the course of the summer, students and mentors have a series of meetings to share ideas. At the conclusion of the program, a day is set aside to showcase the work of the student scholars. In oral presentations, poster sessions, and research exhibits, students present the findings of their summer-long research, on projects that range from polymer synthesis to the culture of bullfighting in Spain. 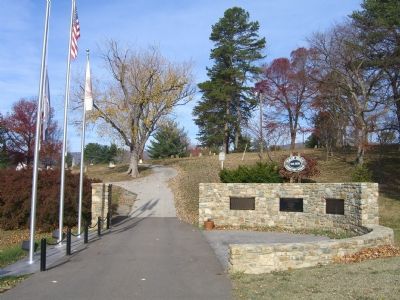 The Summer Scholar award covers one unit of independent study, on-campus housing, and a stipend of $2,500.

History major RJ Warren found his niche when he was recommended to research East Hill Cemetery, North in Salem. After the Civil War, a former slave owner gave land to the African-American community to use as a burial ground in 1868. In 1871, the first person was buried and Salem residents are still permitted to be buried in East Hill.

Located behind the Salem Museum and Longwood Park, the cemetery was formally known as East Hill Colored Cemetery, and is visible from Main Street. However, one can immediately recognize how it might be overlooked by the decrepit gravestones, high grass and weeds that surround the cemetery.

Warren says, “I was always taught as a kid to have respect when walking in a cemetery. When I was first interested in researching this, I walked around and saw how the graves were falling apart, the grass was overgrown, and the basic upkeep of the cemetery was awful. Most people in Salem don’t even know where it is or what it is for.”

Most of Warren’s research involves studying burial receipts at Oakey’s Funeral Home. Receipts describe a person’s race, cause of death, age at death and where they were buried.

“Reading some print and trying to decipher someone’s cursive writing for several hours a day makes you a little bit crazy, but it is an integral part of my research,” says Warren.

The project also takes Warren to the cemetery where he identifies every gravestone and tries to determine who is buried in each location. Not only does he create a list of every person whom he has found buried at East Hill, but he will also write a paper on the history of the cemetery and present his findings during the College’s Family Weekend.

“The research has a definite purpose to make the cemetery known by honoring the forgotten so after people are aware of it, the City of Salem and its citizens will help with the basic upkeep, and inform and teach their children as to why it is there and why it should be remembered,” says Warren.

On September 2, bronze plaques honoring those buried, including the names of individuals previously unidentified at East Hill, will be placed on a large stone wall beside the cemetery. The City of Salem and the Citizens League of Salem are actively involved with this effort.

In retrospect, Warren sees how his work through the Summer Scholar program has turned into something beneficial for the entire city.

“I’m so attached to this project. I’m gaining so much from it, but more people are gaining from this. This is my impact to Salem. I wanted to do something for more than just me. When I’m older I want to bring my wife and children back to Salem and show them what I’ve done to help Roanoke College and the community,” says Warren.

The Summer Scholar program funds all research and is a vital way of furthering academic prominence at the College.

“This was one of the best opportunities that I have had at Roanoke, and I know that it will be advantageous to anyone who participates in the program. It is very appropriate to say that the Summer Scholar program is lighting a fire underneath us for future opportunities,” Warren says.