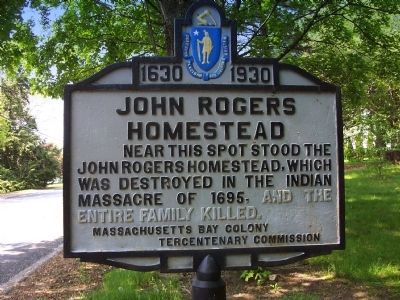 Near this spot stood the John Rogers homestead, which was destroyed in the Indian massacre of 1695, and the entire family killed.

Location. 42° 35.768′ N, 71° 16.85′ W. Marker is in Billerica, Massachusetts, in Middlesex County. Marker is on Billerica Avenue just north of Hickory Lane, on the right when traveling north. Touch for map. Marker is in this post office area: North Billerica MA 01862, United States of America. Touch for directions.