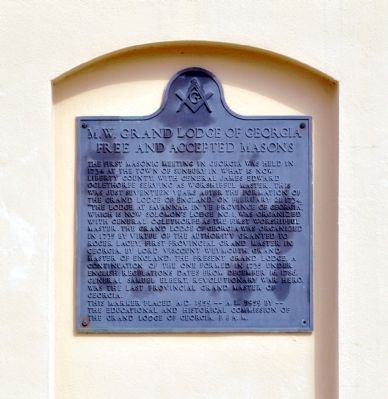 The first Masonic meeting in Georgia was held in 1734 at the town of Sunbury in what is now Liberty County, with General James Edward Oglethorpe serving as Worshipful Master. This was just seventeen years after the formation of the Grand Lodge of England, on February 21, 1734. “The Lodge at Savannah in ye Province of Georgia,” which is now Solomon’s Lodge No. 1, was organized with General Oglethorpe as the first Worshipful Master. The Grand Lodge of Georgia was organized in 1735 by virtue of the authority granted to Roger Lacey, First Provincial Grand Master in Georgia, by Lord Viscount Weymouth, Grand Master of England. The present Grand Lodge, a continuation of the one formed in 1735 under English Regulations dates from December 16, 1786. General Samuel Elbert, Revolutionary War hero, was the last Provincial Grand Master of Georgia.

Erected 1959 by The Educational and Historical Commission of the Grand Lodge of Georgia, F. & A. M.

Click or scan to see
this page online
historical marker is listed in these topic lists: Colonial Era • Fraternal or Sororal Organizations. A significant historical month for this entry is February 1930.

Editor’s want-list for this marker. A wide view photo of the marker and the surrounding area together in context. • Can you help?
Share this page.