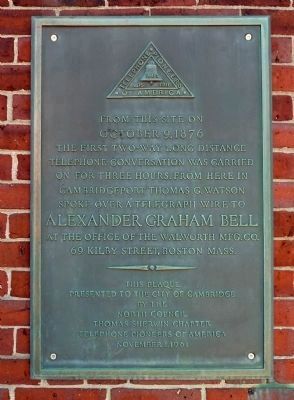 Photographed By Roger W. Sinnott, November 19, 2011
1. First Long-Distance Phone Call Marker
Inscription.
First Long-Distance Phone Call. . From this site on October 9, 1876 the first two-way long distance telephone conversation was carried on for three hours. From here in Cambridgeport Thomas G. Watson spoke over a telegraph wire to Alexander Graham Bell at the office of the Walworth Mfg. Co. 69 Kilby Street, Boston Mass. . This historical marker was erected in 1961 by North Council Thomas Sherwin Chapter Telephone Pioneers of America. It is in Cambridge in Middlesex County Massachusetts

From this site on October 9, 1876 the first two-way long distance telephone conversation was carried on for three hours. From here in Cambridgeport Thomas G. Watson spoke over a telegraph wire to Alexander Graham Bell at the office of the Walworth Mfg. Co. 69 Kilby Street, Boston Mass.

Topics. This historical marker is listed in these topic lists: Communications • Science & Medicine. A significant historical date for this entry is October 9, 1876.

Location. 42° 21.782′ N, 71° 5.716′ W. Marker is in Cambridge, Massachusetts, in Middlesex County. Marker is at the intersection of Main Street and Osborne Street, on the right when traveling east on Main Street. Touch for map. Marker is at or near this postal address: 710 Main Street, Cambridge MA 02139, United States of America. Touch for directions.

Other nearby markers. At least 8 other markers are within walking distance of this marker. Davenport Car Manufactory (here, next to this marker); The Smoot (approx. 0.4 miles away); Fort Washington (approx. 0.6 miles away); Jake & Earl's Dixie BBQ (approx. ¾ mile away); Harry Houdini 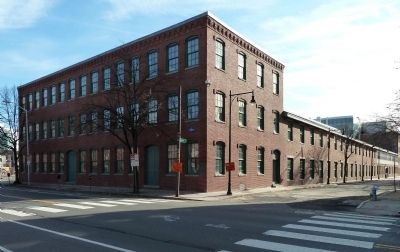 Photographed By Roger W. Sinnott, November 19, 2011
2. View of Building
The marker is mounted on the corner of the old Davenport Car Manufactory building, next to the first-floor window.

More about this marker. “Thomas G. Watson” in the inscription seems to be a typo for Thomas A. Watson.

Regarding First Long-Distance Phone Call. Coming just seven months after their first transmission of speech over a wire, this “long distance” experiment attracted wide notice. For example, on Nov. 18, 1876, the Arizona Citizen (Tucson, Arizona Territory) reprinted the report of a Boston paper: “Telephones were placed at either end of a telegraph line owned by th[e] Walworth Manufacturing Company, extending from their office in Boston to their factory in Cambridgeport, a distance of about two miles. The company’s battery, consisting of nine Daniels cells, was removed from the circuit and another of ten carbon elements substituted. Articulate conversation then took place through the wire. The sounds, at first faint and indistinct, became suddenly loud and intelligible. Mr. Bell in Boston and Mr. Watson in Cambridge took notes of what was said and heard, and the comparison of the two records shows that the transmission was almost perfectly accurate. Conversation 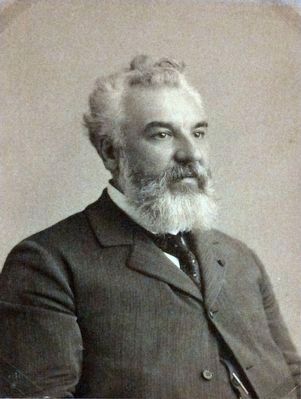 “Inventor Alexander Graham Bell sparked a communications revolution when he patented the telephone in 1876. But Bell considered his work with the deaf to be his true calling. Born to a deaf mother and a father renowned for his work in enunciation, Bell adapted his father's work — a visual, symbolic alphabet for use in producing spoken sounds — for use in teaching speech to the deaf. He opened a teacher training school and became a leader in the education of the deaf. Bell's teaching speech to the deaf was not viewed favorably by all; many advocates thought signing was the appropriate language for the hearing-impaired.” — National Portrait Gallery
was carried on for about half an hour, generally in an ordinary tone of voice, but often in whispers. The credit of this important discovery is due to Mr. Bell.”