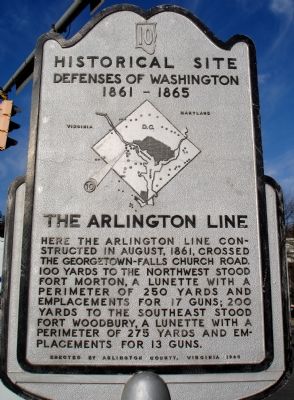 Other nearby markers. At least 8 other markers are within walking distance of this marker. Fort Woodbury (about 700 feet away, measured in a direct line); 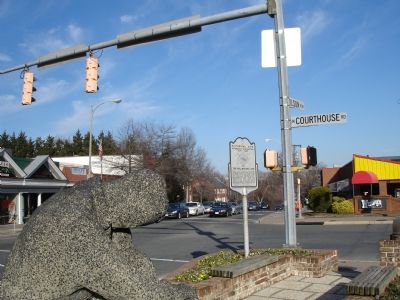 More about this marker. In the center of the marker is a map of the Washington Defenses, with a red (weathered) arrow pointing out the location of The Arlington Line.

The site of Fort Morton is today on the grounds of Key Elementary School, near 16th Street and North Custis Road. The fort was named for Brig. Gen. St. Cair Morton, who was killed at Petersburg, Virginia on June 17, 1864. It was first built as a simple open battery between Forts Woodbury and Strong (DeKalb). After 1863 it was stockaded and enclosed.

The 250 yard perimeter allowed for 17 gun emplacements. Armament included six 12-pdr Napoleon guns. No records of the garrisoning units, but most likely detachments from nearby Forts Woodbury and Strong manned the works.
— Submitted February 4, 2008, by Craig Swain of Leesburg, Virginia.
Credits. This page was last revised on May 27, 2019. It was originally submitted on February 4, 2008. This page has been viewed 1,835 times since then and 16 times this year. Photos:   1, 2. submitted on February 4, 2008. • Craig Swain was the editor who published this page.
Share This Page.