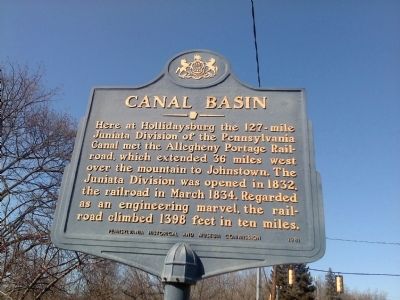 Photographed By Mike Wintermantel, February 6, 2012
1. Canal Basin Marker
Inscription.
Canal Basin. . Here at Hollidaysburg the 127-mile Juniata Division of the Pennsylvania Canal met the Allegheny Portage Railroad, which extended 36 miles west over the mountain to Johnstown. The Juniata Division was opened in 1832, the railroad in March 1834. Regarded as an engineering marvel, the railroad climbed 1398 feet in ten miles. . This historical marker was erected in 1982 by Pennsylvania Historical and Museum Commission. It is in Hollidaysburg in Blair County Pennsylvania

Topics and series. This historical marker is listed in these topic lists: Railroads & Streetcars • Waterways & Vessels. In addition, it is included in the Pennsylvania Historical and Museum Commission series list. A significant historical month for this entry is March 1834. 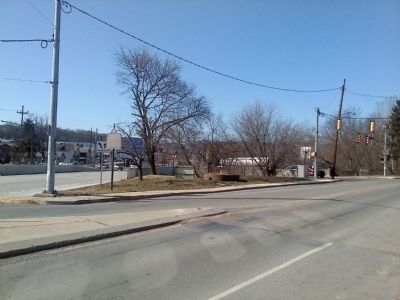