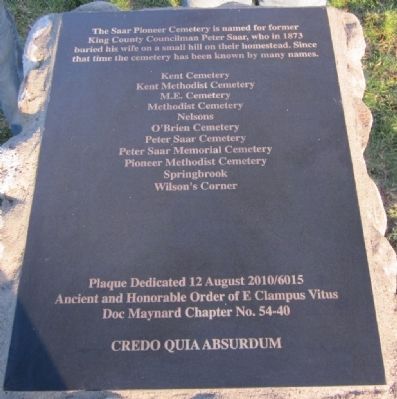 The Saar Pioneer Cemetery is named for former King County Councilman Peter Saar, who in 1873 buried his wife on a small hill on their homestead. Since that time the cemetery has been known by many names.

Topics and series. This historical marker is listed in these topic lists: Cemeteries & Burial Sites • Fraternal or Sororal Organizations. In addition, it is included in the E Clampus Vitus series list. A significant historical year for this entry is 1873.

Location. 47° 24.767′ N, 122° 13.15′ W. Marker is in Kent, Washington, in King County. Marker can be reached from 84th Ave. S. north of South 212th Street, on the right when traveling south. The cemetery is located on the hill in front of the WinCo Grocery Store on the corner of 84th Avenue South and South 212th Street. Touch for map. Marker is in this post office area: Kent WA 98031, United States of America. Touch for directions. 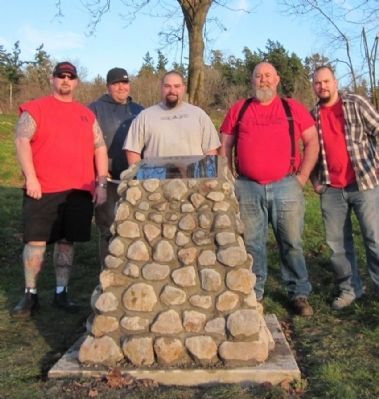 Photographed By Dan McCormick, February 4, 2012
2. The Saar Pioneer Cemetery Marker
Brother's of Doc Maynard Chapter No. 54-40 of The Ancient and Honorable Order of E Clampus Vitus

More about this marker. The marker is just to the right, slightly up the hill as you enter the cemetery. 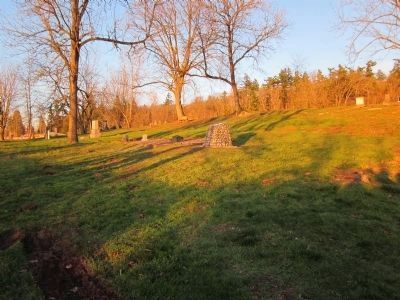