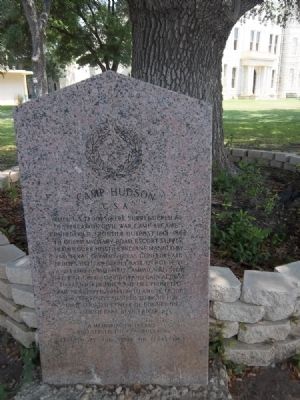 Click or scan to see
this page online
(within shouting distance of this marker); Sacred Heart Catholic Church (about 500 feet away, measured in a direct line); John Taini (about 500 feet away); First United Methodist Church of Del Rio (about 500 feet away); Old Del Rio National Bank Building (about 600 feet away); City of Del Rio (approx. 0.2 miles away); Max and Anna Stool (approx. 0.2 miles away). Touch for a list and map of all markers in Del Rio.
Credits. This page was last revised on November 17, 2021. It was originally submitted on February 16, 2012, by Zacharias Beau T of Alpine, Texas. This page has been viewed 650 times since then and 24 times this year. Photo   1. submitted on February 16, 2012, by Zacharias Beau T of Alpine, Texas. • Craig Swain was the editor who published this page.

Editor’s want-list for this marker. A wide shot of the marker and its surroundings and close-up photo of reverse of marker. • Can you help?
Share this page.